The overtly racist cartoon published last week in the New York Post stands as evidence of the intractable racism that still infects the right-wing media.

Today, Rupert Murdoch, the chairman of the Post as well as its parent News Corp, issued what he regards as an apology:

“Last week, we made a mistake. We ran a cartoon that offended many people. Today I want to personally apologize to any reader who felt offended, and even insulted.”

“Over the past couple of days, I have spoken to a number of people and I now better understand the hurt this cartoon has caused. At the same time, I have had conversations with Post editors about the situation and I can assure you – without a doubt – that the only intent of that cartoon was to mock a badly written piece of legislation. It was not meant to be racist, but unfortunately, it was interpreted by many as such.”

So Murdoch spoke to a number of people and now he understands the hurt that was caused. But he still is only apologizing to those who “felt offended” – as if they were responsible for the pain. What’s more, he characterizing those who were hurt as simpletons who misinterpreted the intent of the cartoon.

What Murdoch does not do is apologize for racism. His new found understanding doesn’t include a grasp of the hatred that is embodied in the insults and violence expressed in the Post’s cartoon. He doesn’t comprehend that his so-called apology has little meaning when it exists in a vacuum unsupported by his actions. After all, he has done and said nothing about his editor’s defense of the cartoon. Col Allan, in his response to the controversy, complained that…

“…there are some in the media and in public life who have had differences with The Post in the past — and they see the incident as an opportunity for payback. To them, no apology is due […and that the cartoon…] is a clear parody of a current news event.”

Apparently it was not so clear as Mr. Allan thinks. If Murdoch has to emerge from his lair a full week after publication, what is clear is that there has been public repulsion to the cartoon that is not going away quickly enough for the media mogul. But he probably won’t have to worry about business at the Post (Well, not more than usual since it has lost millions annually for over a decade). His readers have risen to the occasion to support the cartoon and its message. The vast majority of the comments attached to the online apology either defend the cartoon or berate Murdoch for apologizing. And amidst this rush to embrace hate are comments like this one:

That comment is representative of many of the comments posted on the paper’s web site. Who will apologize for that?

Murdoch’s bully boy, Bill O’Reilly, has repeatedly hammered web sites like Daily Kos and the Huffington Post for what he says is hate speech. He attributes every comment on those sites to the name at the top of the page. In reality it is just an open forum where people speak for themselves. More often than not, objectionable content is quickly smacked down by other commenters. But in O’Reilly’s mind it is still the site’s responsibility. So I wonder if he will show some consistency and condemn the New York Post for comments like the one above. Especially since it is not an aberration, but the consensus.

Actually, I don’t wonder at all. In fact I wouldn’t be too surprised if Osinko turned out to be O’Reilly himself. After all, it was O’Reilly who ventured into Harlem and…

“…couldn’t get over the fact that there was no difference between Sylvia’s restaurant and any other restaurant in New York City. I mean, it was exactly the same, even though it’s run by blacks, primarily black patronship […] There wasn’t one person in Sylvia’s who was screaming, “M-Fer, I want more iced tea.'” 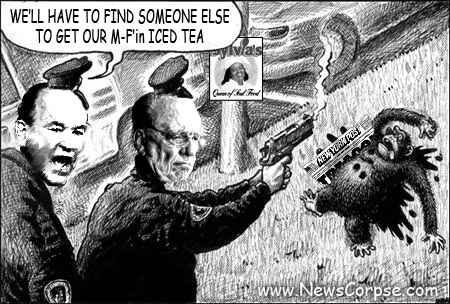 One thought on “Rupert Murdoch Won’t Apologize For Racism”