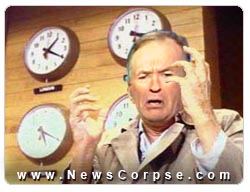 On his radio show last week, Bill O’Reilly regaled his audience with a tale of adventure into the Heart of Darkness – Harlem. He was dining with Al Sharpton so O’Reilly thought he should take the Reverend to a place he might be comfortable. They went to Sylvia’s where O’Reilly chowed down on that “soul food.” On returning from the expedition, O’Reilly expressed his amazement that the Harlem natives were so similar to civilized folks:

“I couldn’t get over the fact that there was no difference between Sylvia’s restaurant and any other restaurant in New York City. I mean, it was exactly the same, even though it’s run by blacks, primarily black patronship.”

He couldn’t get over it. It’s almost like they’re human.

“There wasn’t one person in Sylvia’s who was screaming, ‘M-Fer, I want more iced tea.’ “

Imagine that, they don’t all cuss when ordering refreshing beverages.

“…it was like going into an Italian restaurant in an all-white suburb in the sense of people were sitting there, and they were ordering and having fun. And there wasn’t any kind of craziness at all.”

People were “sitting there” eating food with utensils. It must have been difficult for them to suppress their natural “craziness.”

When asked to respond by CNN’s Rick Sanchez, O’Reilly claimed it was all a “hatchet” job by Media Matters:

“[T]here was no racial intent in what I said. It was a benign program. We didn’t receive one single complaint on any of our radio stations,”

Well, of course – A benign program like that, with no racial intent is certainly not going to draw any complaints from his 99.9% white radio audience.

UPDATE: O’Reilly, defending himself from a report by CNN that interviewed patrons of Sylvia’s Restaurant:

This contradicts his original statement upon visiting Sylvia’s when he said that, “They all watch The Factor.” But now that they are critical of him, they are just a bunch of stupid, uninformed yokels who don’t watch TV and can’t think for themselves.

5 thoughts on “Bill O’Reilly: Surprised Black People Are Just Like Other People”