In February of this year, the unrepentant liar and alleged pervert, James O’Keefe, released another in his series of dishonest, pseudo-journalistic video escapades. In it he falsely asserted that Battleground Texas, a local organization that promotes voter participation, had violated state laws while registering citizens to vote. 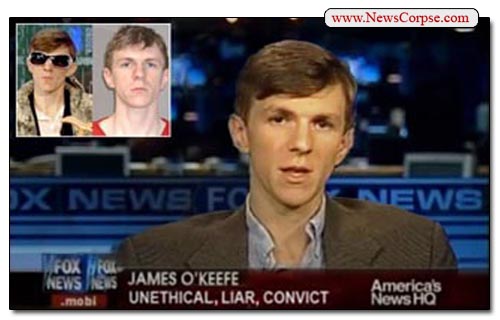 The News Corpse analysis of the video proved that O’Keefe was badly misinterpreting the law and making unfounded accusations against civic-minded volunteers. That is the hallmark of his body of work as a lying propagandist. And he almost always attacks people or organizations that seek to assist the poor or other disadvantaged constituencies. The aforementioned analysis said in part that…

“What O’Keefe did was to clip a portion of the Texas election code that says ‘The registrar may not transcribe, copy, or otherwise record a telephone number furnished on a registration application.’ What he either fails to understand, or is deliberately misrepresenting, is that this section of the law applies only to the Registrar of Voters and other county officials. It does not apply to the volunteers or organizations that distribute and collect voter registration forms.”

Now a team of Special Prosecutors in Texas have affirmed that O’Keefe’s video hackery fails to expose any wrongdoing on the part of Battleground Texas. It can’t be over-stressed that these are Texas-based prosecutors who were assigned by a Texan judge to investigate the charges raised by O’Keefe in his video project. The prosecutors report concluded that…

“The Veritas video was little more than a canard and political disinformation. The video was particularly unprofessional when it suggested that the actions of Battleground Texas were advocated by a Texas gubernatorial candidate and the that actions of a single volunteer deputy registrar may even involve private health data, which is not involved in the voter registration process.”

The report also explicitly addressed the question of whether the Texas election code prohibited the transcription of voter data, including phone numbers. What they concluded, with citations from the current Texas Attorney General (who is running for governor against Democrat Wendy Davis), is that the “statutory provision applies only to the official county registrar, not to a volunteer deputy registrar.” And that just happens to validate the analysis published here on News Corpse two months ago.

The Special Prosecutors closed their report with a recommendation that “the complaint be dismissed for insufficient evidence and failure to state an offense.” The judge agreed and signed the order to dismiss. This marks only the most recent embarrassment for O’Keefe who regularly engages in fraudulent activity in pursuit of his radical, partisan agenda. Some of his other antics have resulted in his arrest and conviction in a Louisiana senator’s office and a legal order to pay a $100,000 settlement to a former ACORN employee he defamed. He himself has broken voter registration laws in a failed attempt to defend suppressive voter ID legislation. And let’s not forget his sleazy plot to seduce a CNN reporter aboard his “Love Boat.”

O’Keefe has not yet commented on this ruling that certifies his blatantly unethical behavior. It is also notable that none of the media outlets that promoted O’Keefe’s lie-riddled video have bothered to report this legal development. Apparently they don’t think it is newsworthy that their trusted source has been deemed a purveyor of “political disinformation” by Texas legal authorities. Amongst those who giddily peddled O’Keefe’s video, but now ignore the legal smackdown, were National Review, Breitbart News, WorldNetDaily, NewsBusters, FreedomWorks, The Daily Caller, Townhall, and Human Events. And of course, Fox News also hyped the video on their Fox Nation (a website that regularly spreads political disinformation and outright lies). This is to be expected from the conservative media circus that is only there to distort and confuse rather than to inform.