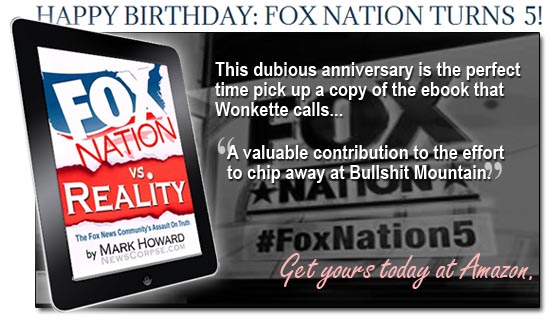 Like the Tea Party, Fox Nation is turning five and behaving very much like any other five year old. They whine when they don’t get their way. They throw tantrums if they are denied. They invent their own reality and dismiss facts that don’t validate their delusional world view. They exaggerate their victories and insult their perceived enemies. It’s a truly pathetic display of childish egoism.

However, this day of celebration is the perfect time get yourself a copy of the acclaimed ebook “Fox Nation vs. Reality: The Fox News Community’s Assault On Truth.” This book is a compilation of more than fifty documented examples of outright lies published on Fox Nation. As the introduction says…

“These are not mere differences of opinion or discussions that might have varying degrees of perspective. They are obvious, provable, out and out lies. They are manifestations of a disconnect with the real world. But they are not the result of psychosis or mistake. They are deliberate and purposeful. They are aimed at an ill-informed audience that is only interested in having their prejudices affirmed. And Fox News is only too happy to accommodate them.”

As an example from the book of one of the blatant departures from reality employed by Fox, take a look at this article where Fox Nation published an item with the headline “Obama More Unpopular Than Tea Party.” However, the New York Times poll cited in the article actually reported Obama’s favorability at 48% and the Tea Party at 20% – a complete reversal of the declaration in the headline.

That’s typical of the way Fox Nation distorts the real world for the benefit of readers who prefer fantasy. And now Fox Nation is bragging about how they have been providing these tales for half a decade. So let’s wish them a happy birthday, but continue to keep an eye on their falsifications and deception as they endeavor to defend the wealthy individuals and corporations they were created to support.

[Update] Joining Fox Nation’s birthday celebration is Breitbart News who interviewed the website’s editor, Jesse Watters (who is rarely identified as the editor in public). Watters revealed that “Matt Drudge and Andrew Breitbart were inspirations” for the site, removing all doubt that it was designed as a right-wing propaganda outlet from its inception. Watters also admits that he is unconcerned with truth-telling:

“If there were any stories his Fox Nation promoted that turned out to be less than factual, Watters won’t dwell on such things. ‘Everyone has regrets about things that are posted. You learn from mistakes and move on,’ he said.”

Of course, what Watters means by “learning” is not taking care to be more truthful, but taking care to avoid getting caught when lying. He also expressed his pride in the site’s followers whom he described as “vibrant, engaged and fiercely loyal.” He left out fiercely racist – like this, or this, or this.