There aren’t too many more pitfalls for a guy like Tucker Carlson. He has already failed on PBS, CNN, and MSNBC. He embarrassed himself by appearing on Dancing With the Stars, and compounded the pain by being voted off first (although that may actually have been a blessing). His game show pilot, shot last year, has apparently been shelved. He will forever be remembered as the “dick” from Crossfire, thanks to Jon Stewart. But now he has taken another fall down the rabbit hole of shame. 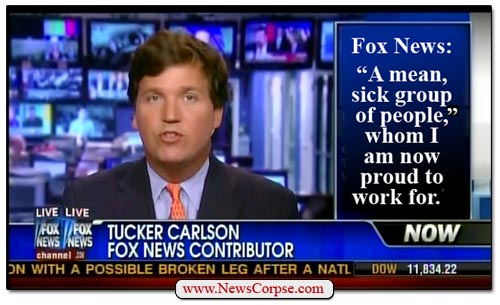 Carlson is the latest in a long line of Fox News sideshow freaks that includes everyone from Karl Rove and Judith Miller to Joe the Plumber and Ted Nugent. His emergence on Fox’s America’s Newsroom with Bill Hemmer must be particularly humiliating for him considering his history with Fox.

In 2003, Tucker was asked on air for his home phone number. He thought it would be funny (in an infantile sort of way) to give out the number for Fox News instead. Not surprisingly, Fox was besieged by anxious Tucker “fans.” So Fox did what only Fox would do. They posted Tucker’s home number on their website asserting that they were merely correcting Tucker’s poor journalism. In a snit that ignored every trace of irony, Tucker called Fox News:

Despite that colorful characterization, Carlson has now been welcomed warmly into the fold. Hemmer greeted him on air with a sly nod to the inevitability of his fate:

Tucker Carlson senior fellow for the Cato institute and a former member of a couple of other news networks that we don’t want to mention here. What’s happening my old friend? […] It’s nice to see you – it’s about time you showed up, frankly.

I guess there was no alternative outcome. Carlson could not withstand the very laws of gravity. Like Glenn Beck before him, he had to succumb to his master – no matter how mean or sick. He is now fully acclimated, and he will serenely conform to Fox’s faux reality. As Hemmer said, “It’s about time.”

One thought on “Tucker Carlson Goes Crawling Back To Fox News”