The main event of the evening was the presentation of the William F. Buckley Jr. Award for Media Excellence to Fox News’ Brit Hume. Hume’s acceptance speech provides further evidence that Fox News has always been a Republican mouthpiece:

Hume: I want to say a word, however, of thanks to Brent and the team at the Media Research Center […] for the tremendous amount of material that the Media Research Center provided me for so many years when I was anchoring Special Report, I don’t know what we would’ve done without them. It was a daily buffet of material to work from, and we certainly made tremendous use of it.

A tremendous amount of material that he made tremendous use of? It sounds like the MRC was Fox News’ wire service. They saved Fox the trouble of having to go out and make up the news by themselves. It is this sort of admission that could get Hume into trouble for saying too much. But this isn’t the first time a Foxian has revealed that they are in the employ of rightist ideologues:

In addition to Hume’s shout out to the MRC, he lashed out at new media and blogs as being responsible for a narrowing of political views in the media.

Hume: I think that we also have the danger that everything will be presented from one political viewpoint or the other, and that the media that confront us are going to be more partisan than ever.

Exactly. You certainly wouldn’t want to have a network that only presented a single point of view, would you? Just ask Roger Ailes: 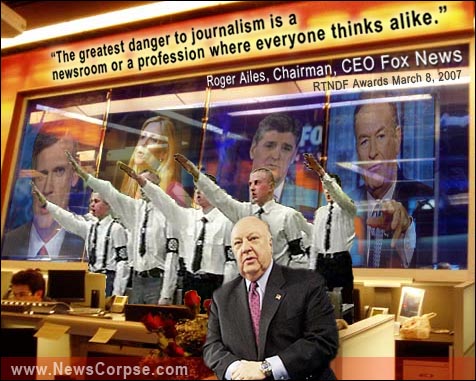