Now that Tax Day has come and gone, we can take an objective look at what all the excitement over the so-called “grassroots” Tea Party movement has wrought.

For an alleged phenomenon that was sweeping a nation of angry revolutionaries, it has left us with no more than a resounding thud. Nate Silver has produced what appears to be the only comprehensive estimate of national attendance, based on authoritative sources like law enforcement and local reporting. His figures conclude that about 262,000 people gathered in over 300 cities across the country to wave tea bags and denounce taxes. That is pretty close to the estimate by the conservative Pajamas Media (sources not disclosed), who place the figure slightly higher at 278,000. Considering the fact that twice as many people will attend a Major League Baseball game on a typical Saturday, every weekend, that doesn’t seem like much to brag about.

Unfortunately, they can’t even blame their failure on their favorite foes. While they fretted for weeks about the Soros-backed ACORN busing in scary community organizers to disrupt their tea bagging, there were no reports of such sabotage. So after failing to preemptively construct an excuse for their flop, they are now accusing the media of neglecting to provide coverage. In truth, the media assigned a fairly appropriate amount of coverage to something so insignificant. And since this was a project that was wholly owned by Fox News, why should the rest of the press go out of their way to give more exposure to their competitor’s programming?

What’s more, it may be unprecedented in the history of public protesting that a major TV network acted as the national coordinating committee and PR agency for a partisan movement. Fox News executed a wall-to-wall campaign promoting these events and their own participation in them. They shamelessly recruited viewers to take up the cause and sent their biggest stars out as enticements. They worked closely with the Astroturf event sponsors and the Republican Party, and provided them with valuable air time to market their “spontaneous” uprising. Advocates and organizers were frequent on-air guests in the days leading up to the 15th. The actual value of all of the accumulated advertising is difficult to estimate, but if a 30-second ad costs about $10,000, and the Fox promo ran once an hour for a week (a modest assumption), that would come to over $1.6 million of free promotion. And that doesn’t include interviews with the party planners conducted during their programming. You know…political product placement.

So what did they get for that investment? Here is a photo of a few dozen rather bored looking revolutionaries at a Tea Party held in Los Angeles, CA., the nation’s second most populous city. 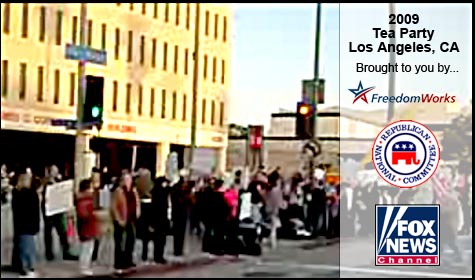 Contrast that with the success of another demonstration in Los Angeles just two years prior, protesting the war in Iraq: 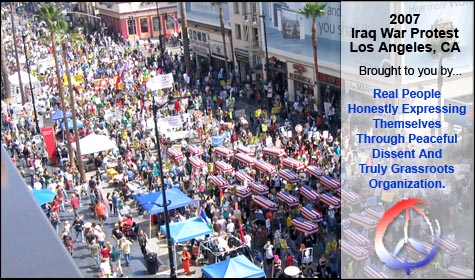 That anti-war rally drew over 6,000 people without the help of the #1 cable news network. More than a million participated nationwide. It was a bona fide grassroots operation populated by citizens with a sincere and deeply felt grievance against their government, not unlike those who attended the Tea Parties. Nevertheless, Fox News not only didn’t contribute to the event’s promotion, they barely covered it while it was in progress – except to disparage the participants as unpatriotic and shiftless. There was no Sean Hannity in Chicago interviewing Michael Moore. There was no Glenn Beck on stage with Neil Young in San Francisco. The Tea Partiers, however, received over four hours of live coverage of their comparatively inconsequential congregations. That’s a lot of broadcast real estate for something that has almost zero news value.

Throughout the build up to, and the coverage of, Tea Party Day, Fox News played the role of cheerleader. They portrayed the protesters as loyal citizens with a justifiable outrage at what they viewed as the government’s usurpation of authority. They praised their courage for denouncing the President and the Congress. That lies in stark contrast to the Fox News characterization of anti-war protesters and Bush opponents as dirty hippies and terrorist sympathizers. Fox routinely asserted that those examples of free speech were unpatriotic and that failure to support the President was akin to treason.

In one respect I have to give them credit. Some of those who used to holler at dissidents to “love it or leave it,” are now demonstrating a measure of consistency. The governor of Texas has broached the notion that his state may be interested in seceding from the union. The state senate in Georgia is following his lead. Sarah Palin’s Alaska has long had a thriving secessionist movement. The cries of “America First” during last year’s presidential campaign were apparently just a ruse. As soon as they are on the losing side of an election they can’t get out of the country fast enough. If that’s what they really want, they can go with my blessing. So long as they let California go as well.

It is a disturbing reality of modern media that an entity like Fox News exists purely to package their partisan agenda in an attempt to influence society’s opinions and policies. But on the plus side, look at how miserably ineffective they turned out to be despite having the biggest megaphone in the cable news arena. If this is the best they can do with millions of dollars and weeks of preparation, maybe it isn’t all that disturbing after all.

One thought on “A Tale Of Two Tea Parties”