Glenn Beck’s unique brand of asylum-spawned demagoguery has drawn comparisons to some notable cranks in history and fiction. Most often he has been likened to either the 1930’s fascist radio priest, Father Coughlin, or to the prototypical, paranoia-crazed tele-pundit, Howard Beale, from the film “Network.”

While both of those models contain poignant resemblances to Beck, neither by themselves comes close enough to capture the full spectrum of his dementia. They don’t even begin to explain his silly costumes and props; his facial tics and nonsense, gurgling noises; his panic-laden admonitions of doom. This is a man who, every day, adds new items to his list of things that cause blood to shoot from his eyes. Were he to be taken literally, he would be severely anemic by now, and his studio would be a quarantined biohazard zone.

However, I think I have just found someone with whom Beck shares a more striking resemblance. I was watching Beck at his white board, attempting to connect everything he hates to everything he fears. It was a ludicrous spectacle that never approached making a sane point: 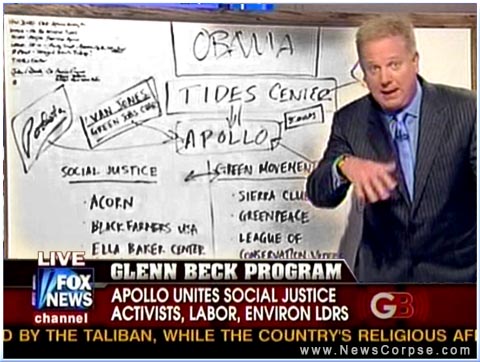 And it was then that my recollection of another televangelist came to mind: 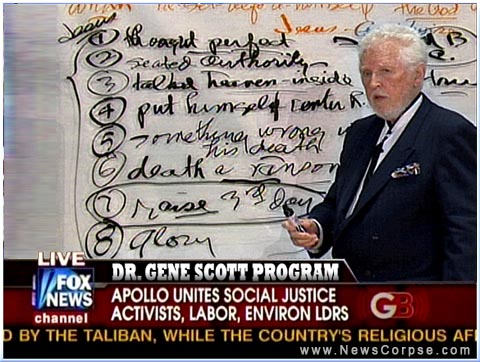 Dr. Gene Scott broadcast something that he regarded as a study of life’s most pressing dilemmas as they related to Bible teachings. But his show was also intended as entertainment that included rock music and self-produced videos of him riding his award-winning horses.

Is it going too far to compare Beck with a fringe religious cult leader? Not when he seems to invite the comparison. Beck has not been shy about his spiritual rebirth. He often relates the story of his descent into alcohol and drugs, and how his surrender to a higher power saved him from desperation and suicide. His conversion may be less than sincere (he confessed to John Stossel that he only became a Mormon because his then girlfriend, now wife, would not have sex with him unless they were married), but he nevertheless peddles his piety like a used car salesman. At one point during today’s program he beseeched his viewers to get down on their knees and pray. At another he mocked the President as “the all-knowing Messiah.” At the beginning of each and every show he implores his audience to “Come on, follow me.” Plainly religion is at the heart of his crusade.

I would not be the first to observe that the rhetoric of Beck has escalated to dangerous levels. His ravings are so far beyond reasonable discourse that even his bosses at Fox News had to distance themselves from him (albeit in the weakest manner imaginable). What may be more worrisome is that he is also beginning to display the traits of Apocalyptic cult leaders like David Koresh and Jim Jones. It appears that he views himself as an embattled beacon of God’s truth who is besieged by the forces of evil. He frequently prefaces his conspiracy theories with laments like “Is it just me…?” He wonders aloud why no one else can see the doom on the horizon that to him is so evident. And, like any good Apocalyptic cult leader, he imagines that he is a target and that his time on Earth is near an end.

Beck 5/12/09: “If I’m ever in a weird car accident, or I commit suicide or something, after the media stops celebrating my death, could they check into it? Because I’m not suicidal. And I’m a pretty good driver.”

Are these words a foreshadowing of another Jonestown? Does Beck really believe that unseen forces are amassing to oppose and silence him? It should be noted that Beck’s family has a record of suicide (his mother and sister). Beck himself has publicly stated that he has been suicidal on at least two occasions. How far off would it be for him to imagine that a step toward eternity was really a bid for martyrdom? He could go out in a blaze of Patriopathic™ glory on behalf of the country he loves so much it brings him to tears.

I hope somebody’s watching him – and monitoring his meds.