Earlier this week there was some industry speculation that Sarah Palin was shopping herself around for a talk radio gig. But before you can say “You Betcha” her hopes of radio stardom were quickly dashed.

Broadcasting & Cable:“While you might assume Palin would be a better fit for conservative radio than the less partisan world of syndicated broadcast TV, my sources say the country’s biggest radio conglomerate, Clear Channel, has already passed on her.“

It must be an especially difficult defeat for Palin to be rejected by Clear Channel, an outfit whose standards are low enough to admit Glenn Beck. But their reasoning is sound. There is little evidence that Palin could hold listeners for three hours of her gibberish. 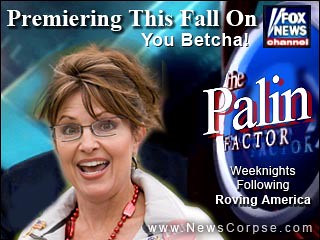 So where does this leave the former half-term governor? Only one option ever really existed for her: Fox News! Since she can’t speak extemporaneously for the duration of a daily radio show, and she wouldn’t appeal to the broader audience necessary to succeed in television syndication, she would have to find a situation where she would have the comfort of a prepared script and an pre-selected audience of rightist lemmings who would worship her every word (and wink) no matter how asinine. Ergo, Fox News.

I predicted a Palin show on Fox News last year, even before the she lost the election. And earlier this month, when she announced that she was quitting her job in Alaska, I said…

A Palin show on Fox News has always been a good fit for both her and Fox. Neither have an interest in, or reputation for, honesty or accuracy. And both have profited from exploiting controversy and sex. Plus, she wouldn’t be the first potential 2012 Republican presidential candidate with a show on Fox, would she, Mike Huckabee?

I think that about covers it.