The faux patriots at Fox Nation are making a habit of exploiting the image of 9/11 and contriving false and negative associations with Democrats. Last week the Fox Nationalists published an article accusing President Obama of desecrating the memory of 9/11 because he supported a National Day of Service to be held in conjunction with other memorials. The view at Fox is that Americans coming together to make a better country is a horrible insult to the anniversary of the terrorist act. So Fox Nation posted this image juxtaposing the burning World Trade Center towers with the President:

Their undisguised intent was to visually associate Obama with a horrific event that he had nothing to do with. Well, today Fox is at it again with an even more repulsive and dishonest defamation: 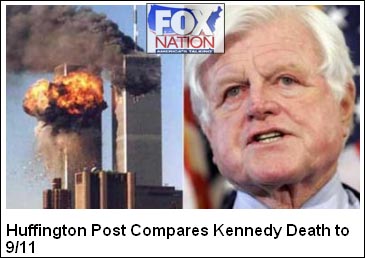 Just three days after the death of Sen. Kennedy, Fox Nation found a way to denigrate his memory in the same fashion as they did with Obama. In this case, however, they really had to test their capacity for lying because the headline attached to the image is 100% false. The Fox Nationalist’s editors title the item “Huffington Post Compares Kennedy Death to 9/11.” But the Huffington Post did no such thing. There was no article about Kennedy and 9/11 at all, much less one comparing them. The headline is a blatant, brazen, bald-faced lie.

“It feels a bit like 9/11 on Martha’s Vineyard. End-of-summer weather is achingly beautiful but the mood is melancholy because of Teddy.”

For the record: After receiving some replies on Twitter that questioned whether the simile was appropriate, Cooper tweeted that he had clumsily stated his observation and only meant that both were otherwise pleasant summer days that were marred by sadness, and that is was not a comparison of Kennedy’s death to the 3,000 murders on 9/11.

So, what does Cooper’s tweet have to do with the Huffington Post? Absolutely nothing. There was no article on HuffPo that was remotely associated with this. However, Cooper has written articles in the past that appeared on HuffPo. The last one was in December 2008. So according to Fox Nation, if you are the editor of Portfolio, but you wrote something for HuffPo nine months ago, and then you tweet something on your personal Twitter account not affiliated with either publication, then obviously you are speaking for the Huffington Post and even your misstatements are attributable to them.

And best of all, for the Fox Nationalists, is that you get to post a disgusting image that conflates the recently deceased senator with a national catastrophe, and place it all above a headline that is a lie.

So did Rupert Murdoch actually say that 9/11 is bullshit? Well he is certainly exploiting it for crass political purposes which could be construed as regarding it as excrement that is not worthy of respect. So by that measure, my headline is just as accurate as the one on Fox Nation.