Texas representative Louie Gohmert has made a spectacle of himself on too many occasions to count. Some of his Hall of Shame achievements include demanding that Secretary of State John Kerry resign before he brings God’s judgment down on America; warning that marriage equality will take the country down the road to the dustbin of history; calling for the arrest of Attorney General Eric Holder; asserting that ObamaCare will lower life expectancy in the US; and advocated raising taxes on the poor. And that’s only a sampling.

Yesterday Gohmert participated in a hearing on the Comcast/Time Warner cable merger. There are many reasons why that deal should not be allowed to proceed. It would create an anti-competitive monolith with unparalleled power over cable television and the Internet. It would also impair customer service and lead to higher prices. But Gohmert found an angle to question the merger that only he could have dreamed up. He believes that Comcast is engaged in a conspiracy to silence Glenn Beck. 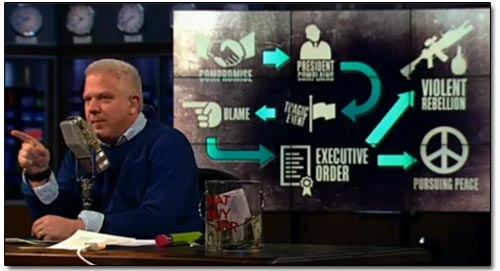 Gohmert: “Al Gore was pushing the sale of Current TV, and Glenn Beck, the Blaze were trying to buy it. And it was reported that Al Jazeera wanted to get their Sharia law push into the United States, and they were willing to pay big bucks, regardless of whether they had oil and carbon all over the money. They were willing to pay big dollars but they wouldn’t do the deal unless Comcast was willing to keep them in its list of networks provided. So it was reported Comcast agreed, so Al Gore got all that oil and carbon based money. And then, that kept Glenn Beck off the air of Comcast.”

The allegation that it was “reported” that Al Jazeera wanted to push Sharia law in the U.S. was supported nowhere in Gohmert’s remarks – or reality. Furthermore, Comcast had nothing to do with who Gore sold his network to. Hypocrites like Gohmert develop sudden aversions to their vaunted free market if it interferes with their liberal bashing. And while Gohmert is aghast that Gore did business with a network based in Qatar, an American ally, he has no problem with a network owned by a disgraced Australian and a Saudi prince (yeah, that’s Fox News).

But the loopiest part of Gohmert’s tirade was his condemnation of Gore’s oil and carbon soaked money. That’s coming from a Texas congressman who himself is drenched in fossil fuels. What must his constituents think of that characterization? And never mind that Al Jazeera is an award-winning international news network that has more coverage of climate change than any American news network. And there’s still more…

Gohmert: “I’m wondering how strong the feeling within Comcast of their fiduciary duty to stockholders is for monetary gain as opposed to political achievement of keeping conservatives off the air. We’ve heard the discussion of rurals not being part of the push by Comcast. And I get that. Why would Comcast want people who cling to God and their guns.”

First of all, it may be a symptom of acute dementia to accuse Comcast of keeping conservatives off the air. It is, after all, a cable operator that currently offers programs starring Ted Nugent, Sarah Palin, and the Duck Dynasty dimwits. And let’s not forget Fox News and Fox Business. Gohmert insists that Comcast is opposed to gun-toting evangelicals, and that is what is behind their snubbing of Glenn Beck. However, they have a much better reason. They know that Beck was fired by Fox News because his juvenile, racist, and hostile brand of conspiracy theorizing drove away all of his advertisers. Comcast is a for-profit corporation and they are not about to carry a nutcase whose channel will lose money and possibly hurt the advertising revenue of other Comcast channels.

There’s another unseemly factor in Gohmert pitching for Beck’s lame video blog to become a real cable channel. A few weeks ago Beck was pushing Gohmert’s political career and trying to draft him to run for the senate. Beck frequently features Gohmert on his radio program and regularly praises him on the air. Yesterday Gohmert was paying him back.