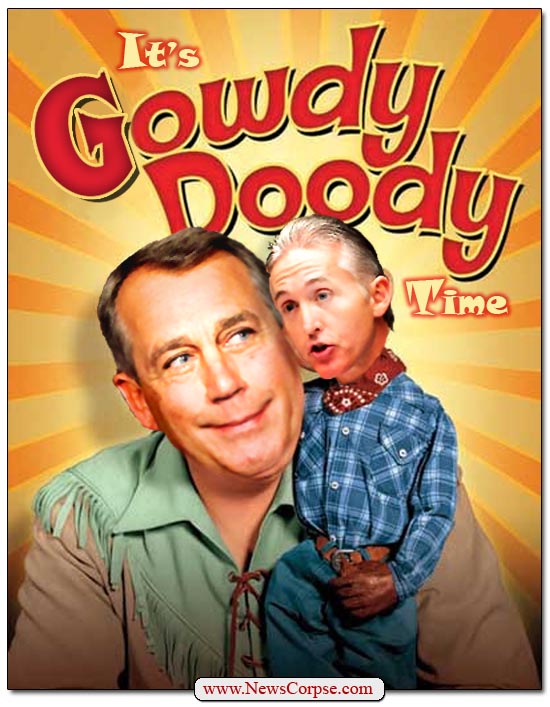 Something has gotten into the water at the New York Times. This week they published an editorial that is not only rich in facts and substance, it is entertaining and persuasive. The headline announced an excursion into the “Center Ring at the Republican Circus.” And the opening paragraph may be the best introduction to a Times editorial ever:

“The hottest competition in Washington this week is among House Republicans vying for a seat on the Benghazi kangaroo court, also known as the Select House Committee to Inflate a Tragedy Into a Scandal. Half the House has asked to ‘serve’ on the committee, which is understandable since it’s the perfect opportunity to avoid any real work while waving frantically to right-wing voters stomping their feet in the grandstand.”

I couldn’t have said it better myself. The Times’ editorial board appears to have hired some writers with both insight and humor. They correctly note that the committee is an unambiguous fraud whose members are only concerned with promoting a manufactured scandal and, of course, themselves. The article goes on to say that the GOP Congress…

“…won’t pass a serious jobs bill, or raise the minimum wage, or reform immigration, but House Republicans think they can earn their pay for the rest of the year by exposing nonexistent malfeasance on the part of the Obama administration.”

The newly appointed chair of the committee, Trey Gowdy, recently proved that he is unfit to lead a fair hearing when he admitted that his party runs the House in a brazenly biased manner. Discussing whether another committee should call expert witnesses to determine whether Lois Lerner waived her 5th Amendment rights, Gowdy said “Let me take out all of the drama. We would pick three that said she waived, and they would pick one that said she didn’t. I hate to do a spoiler, but that’s the way that hearing would go.”

In other words, he is admitting that the GOP-run House would stack the deck in their own favor. So why bother discussing it with experts. That’s a preview of how he can be expected to run the Benghazi committee. And with regard to that IRS pseudo-scandal, the Times continued to needle the scandal mongering of the GOP, saying that Lerner is the person that…

“…they would love to blame for the administration’s crackdown on conservative groups, if only they could prove there was a crackdown, which they can’t, because there wasn’t.”

In addition, the Times couldn’t let the right-wing’s previous obsession with ObamaCare go unmentioned just because it didn’t happen to mark the commencement of Armageddon like they predicted/hoped. So the article noted the GOP’s…

“…need to rouse the most fervent anti-Obama wing of the party and keep it angry enough to deliver its donations and votes to Republicans in the November elections. For a while it seemed as if the Affordable Care Act would perform that role, but Republicans ran into a problem when the country began to realize that it was not destroying American civilization but in fact helping millions of people.”

Finally, the editorial concluded with the correct advice for wavering Democrats:

“Democrats who are now debating whether to participate in the committee shouldn’t hesitate to skip it. Their presence would only lend legitimacy to a farce.”

I can’t remember the last time I read an editorial in the Times that was so spot on in its analysis and delivered with such punch. I hope this wasn’t an aberration or the work of a ghost editor who has since faded back into the ether. We need more of this kind of commentary. And we need it from more than just the New York Times.