Tonight, more truth. More truth that I, quite frankly, am shocked by. I’m going to show you a quote here in just a few minutes, something that will melt your brain. If you’re a regular reader of this web site, you are going to say, “You got to be kidding me!”

There is information that you’re just not going to see anyplace else. I have to first give you a little bit of history, because the context is so important. So, if you just bear with me for a few minutes, I have to tell you a story.

I don’t want to believe that these things are true. I would love to be wrong. I love my country. I think you do, too. I don’t care if you’re Republican or Democrat. It’s not about party. It’s about our country. What I am telling you now is that there are Marxist revolutionaries who have dedicated themselves to principles that will destroy our nation as we know it! Now, that is a heavy charge, granted. That’s why I put the phone there. 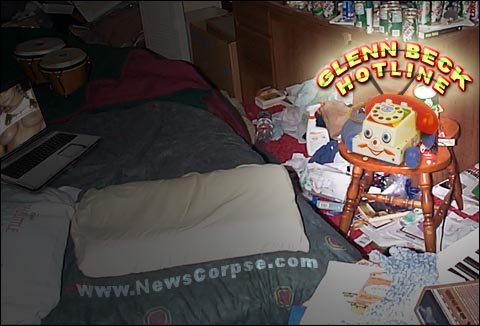 That phone is directly to Glenn Beck. He is the one that Rupert Murdoch has put in charge to lead the campaign against Barack Obama and this web site.

Call me, Glenn. Call me! I’m begging you – call me, correct me. Tell me what I post here is not true. It would help me sleep at night. It would.

…..I haven’t received any phone calls…..

There was a controversy because people said, “You’re going to put Adolf Hitler up there?” Yes, Adolf Hitler. That’s a pretty hefty charge that people in America, in our media, listen to Adolf Hitler. Well, this person is in love with Adolf Hitler. These are Glenn Beck’s own words:

“Oh, you know who my favorite political philosopher is? Adolf Hitler.”

This week, I pointed out that Beck was a fan of the socialists and of the Marxists. Ask yourself, America, please ask yourself: If I am wrong, how is it possible he has not called? You’d think being labeled a fan of a guy who killed millions of people would make you pick up the darn phone. Don’t you think?