Thanks to Fox News honcho Michael Clemente, who revealed that Your World with Neil Cavuto is not a news program, we can now evaluate the program for what it is. Clemente explicitly left out Cavuto’s program when he said that Fox’s news schedule is from 9:00am to 4:00pm and 6:00pm to 8:00pm. Cavuto’s show starts at 4:00pm.

So what can we say about this entertainment/opinion hour? Well, for one thing, Cavuto seems to regard himself as a humorist. He spends at least as much time cracking what he thinks are jokes as he does yelling at, and interrupting, his guests. He closes every program with a “Common Sense” essay that he stuffs with lame puns. I guess that’s why they call him a pundit. (Oh damn. Now I’m doing it).

But that isn’t really what’s at the core of his act. When we look closely, it is clear that Cavuto has a deep appreciation for stunts and props. That would make him a threat to the reigning master of prop comedy, Carrot Top. 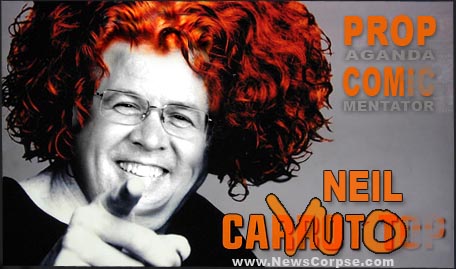 Some recent examples include his interviews with guests who had nothing substantive to contribute to any public debate, but were coincidentally engaged in some field of work that Cavuto found relevant. For instance, he brought in a Cadillac dealer when discussing a proposed tax on generous employer sponsored health plans that were being called “Cadillac Plans.” Of course, the dealer had no particular expertise in insurance policy or taxation, but he did have a big chunk of real estate with some GM cars parked on it. Another example was Cavuto’s dialogue with the CEO of AstroTurf Technologies. This non-illuminating discussion was sparked by the question of whether organizers of Tea Party events were really grassroots citizen groups or well-funded lobbyists and foundations. Once again, nothing in this segment advanced understanding of the issue because the AstroTurf chief’s experience had more to do with synthetic fiber products than with campaign development and event planning.

In addition to Cavuto’s unique selection of irrelevant guests, he also plotted some pathetic stunts. For several days Cavuto was obsessed with Democrats who were holding meetings “behind closed doors.” Cavuto couldn’t get over the fact that there were doors and that they weren’t open. He seems to think that Democrats are obligated to allow Republicans and Fox News into private caucus meetings. Does he also think that Democrats should have free access to Republican caucus gatherings? Cavuto’s response was to invite Mr. Handyman to the show. Mr. Handyman demonstrated some techniques for keeping doors open, like wedge stoppers. On another occasion, Cavuto played clips of Dora the Explorer when President Obama declined to be interviewed by Cavuto or others at Fox. I still don’t know what point that was supposed to be making, but Cavuto was clearly hurt that the President had snubbed him.

But the piece de resistance was hiring a speed reader to plow through the voluminous health care bill. His apparent intent was to draw attention to the sheer size of the bill. So he has the world’s faster speed reader inhabit a little box in the corner of the screen where viewers can watch him discard pages unto the floor at about a second per page. Unfortunately for Cavuto, this prank doesn’t really help his argument. First of all, it is another pointless exercise because, although this fellow can read fast, he can’t contribute any informed analysis after having consumed the bill. He is not a doctor or a lawyer or a health policy expert of any kind.

However, the big failure on Cavuto’s part is that the only thing his shenanigans accomplished was to demonstrate how quickly the bill could be read. The speed reader completed his task in less than an hour. Even if someone else took ten times as long, it proves that it could easily be done in a day or two. And if it were split up between several staffers with specific areas of expertise, it could be done even faster. So the length of the bill is really pretty easy to digest. I also have to wonder what Cavuto’s alternative is. Would he prefer a short bill of a dozen or so pages? It seems to me that that would be a recipe for legislative disaster as it could not possibly anticipate the myriad complexities of a major health care system overhaul.

None of that matters, though, if your goal is simply to amuse, and to pull goofy props out of a steamer trunk. That’s the level of understanding that Cavuto is presenting to his audience. And since his audience is made of people who watch Fox, he’s probably still a little over their heads.