This morning, during his radio show, Glenn Beck suffered a mutiny staged by the only internal organ he has that exhibits any signs of intelligence. Beck’s appendix took the opportunity to escape while his brain was preoccupied with manufacturing excuses for why his candidate for Congress in New York’s 23rd District, Doug Hoffman, failed to stop Bill Owens from becoming the first Democrat to win the district in over 100 years. The best efforts of Beck, Sean Hannity, and Sarah Palin, fell short of persuading voters that an inexperienced, ill-informed, tea bagger, who didn’t even live in the district, ought to be their representative in Washington.

The strain of having to face his impotence was the perfect opening for his appendix to skip town. Beck was consoled by the fact that his wealth provides him with the best health care that money can buy, a benefit that he is fiercely opposed to for his fellow Americans. In a statement released late today, Beck accused his appendix of being a Mao-loving communist. 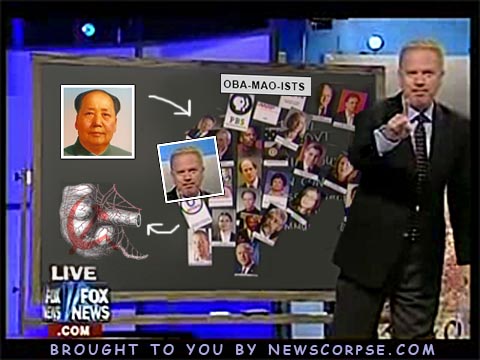 In other news, Thomas Frank writes in the Wall Street Journal that the red phone Beck keeps on his desk to receive calls from the White House is just another meaningless prop. The people to whom Beck said he had sent the number told Frank that they were never contacted by Beck and do not know the number. Yet on a daily basis Beck repeatedly holds up the phone and wonders aloud why those he has slandered as commies haven’t called him. Of course there was never any expectation that anyone from the White House would patronize Beck’s dementia by calling, but now we know that it was all a charade and (surprise) a lie. For the record, Beck has still not called me to deny that he idolizes Adolf Hitler as he says in this linked video.

Finally, as if further evidence were required, Beck has once again revealed his overt racism in a comment on yesterday’s program. He was teasing a segment scheduled for Friday’s show (which he will not be hosting now because he will still be recovering from surgery), when he visits Harlem with a Fox News pal.

“If you’re Glenn Beck and you’re in Harlem and somebody taps you on the shoulder and says, ‘Mr. Beck, excuse me.’ You tend to maybe think, ‘Uh oh, I might be in trouble here.’“

So Glenn Beck goes to Harlem and someone taps him on the shoulder – not grabs his arm or shoves him against the wall – but merely taps him on the shoulder. Then the stranger respectfully addresses him as “Mr.” and uses his surname – not “hey you” or “yo asshole.” Finally he courteously requests that he be excused for interjecting himself. And after all of that, Beck considers himself to be in danger, solely because he’s north of 110th Street in Manhattan. What sort of person would arrive at that conclusion? A racist, maybe?

No wonder his appendix would risk it all, even being discarded as bio-waste, just to get away from Beck.