Today on CNN’s Reliable Sources, host Howard Kurtz raised an issue of obvious hypocrisy on the part of Fox News. The segment addressed an incident a couple of weeks ago when Rep. Alan Grayson referred to an aide to Fed chairman Ben Bernanke as a “K Street whore.” Fox News jumped on the comment and repeatedly criticized Grayson for making an insensitive and sexist remark. Grayson has since apologized.

A few days ago Glenn Beck used similarly offensive language when referring to Sen. Mary Landrieu. Beck said that Landrieu was “hooking” but “not cheap.” Kurtz took this opportunity to upbraid Fox News for being less than fair and balanced because they didn’t report Beck’s remarks or criticize him. Beck has not apologized. 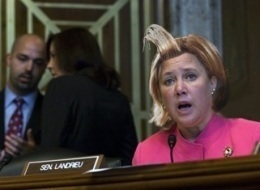 I suppose I shouldn’t complain that Kurtz properly observed Fox’s hypocrisy. However, Kurtz left something out of the story that many people might consider relevant. You see, Mark Halperin, editor-at-large and senior political analyst for TIME, had something to say about Landrieu as well. He posted this modified photo of the senator on his TIME web site, The Page.

Why didn’t Kurtz take Halperin to task for a visual commentary that was just as offensive and perhaps more repulsive? Could it have anything to do with the fact that Kurtz’s employer, CNN, is owned by Time Warner, and so is Halperin’s employer, TIME? It is unlikely that Kurtz was not aware of the Halperin incident, as it caused such a ruckus he was forced to remove the picture.

Kurtz’s impartiality has been questioned on numerous occasions. Most frequently with regard to his role as a media analyst for both CNN and the Washington Post. Critics have complained that he cannot serve both masters and expect to be regarded as thorough and neutral, while he insists that he has always been tough on every news enterprise on which he reports. However, in this case, he blatantly lets his corporate cousin off the hook.

If Kurtz wants to be taken seriously, he needs to begin acting like an impartial observer. All that he accomplishes with this sort of hackery is to embarrass himself and the news bureaus that employ him. But on one level we can have a fair measure of confidence: When Kurtz reports on the behavior of whores, he knows what he’s talking about.

To his credit, Kurtz did challenge Jim Geraghty, the right-wing lip-servicer from the National Review, who tried to excuse Beck’s boorishness, by saying…

“Oh, I see, Grayson should be held accountable because he’s an elected official, and Glenn Beck is in the gasbag business, like many of us on television.”

That’s telling him – and yourself too.