Republicans have been working overtime to associate the problems at the Veterans Administration with the Affordable Care Act (aka ObamaCare). It’s an association that makes no logical sense as the two programs are not remotely similar. But that didn’t stop neurosurgeon-turned-wingnut, Ben Carson, from joining the crusade of ignorami, and framing it in his own uniquely repulsive way. 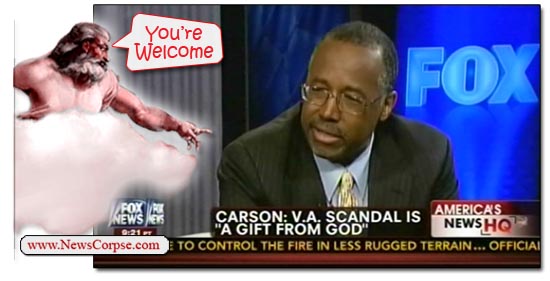 In an interview with Fox News anchor Uma Pemmaraju, Carson went on one of his patented rhetorical demolition derbies, wherein ideology collides with fallacy to produce absurd mutations of reason. This is, after all, the same person who recently said that ObamaCare is “the worst thing since slavery.” Because everyone knows that servitude enforced by brutality is way better than having to endure access to affordable health care. It took Dr. Carson to explain it all for us. And that’s just what he did in this exchange on Fox News:

Pemmaraju: There are those who say that what’s happening now is also a preview of what we might see once the ObamaCare system is fully in place in this country. Do you say that? Do you agree with that point of view?

Carson: I think what’s happening with the veterans is a gift from God. To show us what happens when you take layers and layers of bureaucracy and place them between the patient and the health care provider. And if we can’t get it right with the relatively small number of veterans, how in the world are you gonna do it with the entire population? You don’t have to be a rocket scientist to figure this out.

Carson’s sanctimonious gratitude for the unnecessary tribulations caused by the VA’s deficiencies is surely not shared by the veterans who have suffered because of it. His remarks demonstrate a severe lack of sensitivity for the vets and their families. But more to the point, Carson has also demonstrated a gross misunderstanding of the health care provided by both the VA and ObamaCare.

The VA is a single-payer system wherein all of the facilities and the personnel are directly under the control of the government. The VA employs all of the doctors and owns all of the hospitals. And while the transgressions recently uncovered are serious, the VA as a whole has held a stellar reputation and a markedly high satisfaction rating by those it serves. Its recent difficulties can be attributed directly to the Bush wars in Iraq and Afghanistan, and to Republicans obstructing funding to expand the VA’s capabilities as the population it services has grown.

ObamaCare, on the other hand, is a free-market program where people acquire their own private insurance and they are free to choose whatever insurance plan they want. Their care is provided by doctors participating in the plan and, contrary to the delusions of conservative crackpots, the government has no role and there are no layers of bureaucracy whatsoever between the patient and the health care provider (except those imposed by the insurance company).

Consequently, Carson’s conclusion that the problems at the VA are proof that ObamaCare cannot succeed is utterly lacking reason or evidence. The two programs are far too dissimilar to compare. It’s like saying that the failure of gasoline to put out a fire is proof that water won’t make flowers grow. But Carson is right about one thing: “You don’t have to be a rocket scientist to figure this out.” And apparently it doesn’t help to be a brain surgeon either.

8 thoughts on “Ben Carson: What’s Happening With The Veterans Is A Gift From God”