The never-ending fount of lies, distortion, and disinformation that is known as Fox News has long ago ceased to surprise media watchers who are accustomed to their shameful propagandizing and absence of journalistic ethics. Yet every now and then, Fox still manages to find a way to embarrass themselves with ever-lower descents into idiocy. For example, Fox News contributor and hero-hating war criminal, Allen West, has provided Fox with an “exclusive” that will surely blow the lid off of the Benghazi affair: “Confidential Source Reveals To Me What Really Happened In Benghazi.” 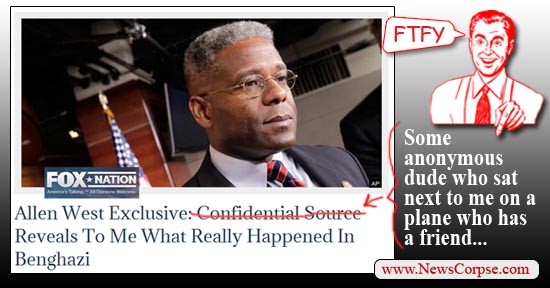 For more outrageous lies from Fox…
Get Fox Nation vs. Reality. Available now at Amazon.

The significance and credibility of this story was so profound that the Fox Nationalists featured it at the top of their website. West began his shocking expose by revealing that…

“Today as I returned from Detroit, I had a moment that I truly felt was God sent, as I don’t believe in coincidences. It happened on one of my flights, and it was two hours I will never forget.

“I was seated beside someone who personally knew one of the men who was there on the roof in Benghazi. This person was excited to share with me the ‘ground truth’ of what happened September 11, 2012.”

So West’s source for his exclusive was God, as represented by an anonymous stranger that happened to be sitting next to him on a plane. And who could possibly have more authority and respect than some dude (not to be confused with Jeff Lebowski) in the aisle seat on a flight from Detroit? The Dude then proceeded to tell West what some other dude, also anonymous, told him.

“My seat mate drew schematics to orient me to the ‘time and spacing’ and the direction of the attack. I learned about the repeated orders to the men at the CIA annex to stand down and do nothing — thank God two of them, Glenn Doherty and Ty Woods, lived up to their code of honor and ran to the sound of the guns, resulting in their loss of life.”

While West says he learned of orders to “stand down,” every credible, independent investigation found that no such orders were ever given. But West has the word of the dude on the plane, so that settles that argument. And why West thanks God that two men lost their lives while engaging the attackers can only be known to him.

West’s Dude also told him that “the attackers were indeed Ansar al-Sharia” and why Amb. Chris Stevens was in Benghazi in the first place (which West neglects to disclose in his article). He also alleged that there are others who are “being threatened with their pensions being cut off if they come forth to speak.” That’s a convenient excuse for the failure of any corroborating witnesses coming forward. However, it is also insulting and improbable because it presumes that people who put their very lives on the line for their country are scared off by losing some retirement income. In other words, what West expects us believe is that these patriots will throw their bodies in front of enemy bullets, but losing a paycheck will frighten them into silence.

West further alleges that his Dude told him about “covert weapons schemes” that involve the U.S. “supplying radical Islamists with weapons” in an international conspiracy that stretches from Libya to Syria and beyond. And for some reason the Dude was perfectly comfortable to spill his guts on a commercial airliner to the guy that sat down next to him. Of course, the Dude, as noted above, had no direct knowledge of anything he was saying. He was relaying what some other unidentified dude, who supposedly was in Benghazi at the time, told him.

This is what passes for an “exclusive” news report on Fox News? A third-hand tale of conspiracy theories and previously debunked allegations? There is absolutely no evidence that any of these assertions are accurate. To the contrary, some of them have already been proved false. And furthermore, there is no reason to give any credibility to a partisan wingnut who was forced to resign from the Army (West), recounting the ramblings of an airline passenger who says he knows someone who says that these myths are true. And yet, Fox News made this their top headline. Fair and balanced.

10 thoughts on “Flakes On A Plane: Is This The Stupidest Fox News ‘Exclusive’ Ever?”