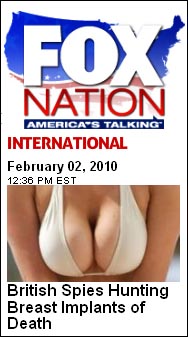 The Fox family of propagandists has long been a partner of the world’s terrorists. They vigorously strive to exacerbate anxieties about security, mostly sensationalized and irrational, via their many media platforms. This promotion of dread is the stuff upon which terrorism relies to be effective. Al Qaeda owes Fox News a debt.

Today on Fox Nation, the war to produce evermore trepidation escalated with a featured link to an article on WorldNetDaily warning that the British spy agency, MI5 is “Hunting Breast Implants of Death.”

“Agents for Britain’s MI5 intelligence service have discovered that Muslim doctors trained at some of Britain’s leading teaching hospitals have returned to their own countries to fit surgical implants filled with explosives. […] Women suicide bombers recruited by al-Qaida are known to have had the explosives inserted in their breasts under techniques similar to breast enhancing surgery.”

WND is not reporting this as hypothetical, but as a plot already in progress with armed breasts at the ready. And all of this is according to…well, the subscription-only bulletin of WND’s own editor, Joseph Farah. In fact, there are five solicitations for his $10.00/month G2 bulletin in the brief excerpt posted on WND.

Were we to take these warnings seriously, it would require some adjustment to our transportation security procedures. We would need to start including Scarlett Johansson in our profiling criteria. And because the same explosive devices could be inserted in the buttocks, Jennifer Lopez would have to be added to the no-fly list. New guidelines will have to be written for airport screeners. If you look anything like Johansson or Lopez, you better allow extra time for boarding (and groping).

I, for one, am pretty upset about this. It’s one thing to be nervous about young Middle-Eastern guy with a long beard in the seat next to me. But if I have to be afraid of sitting next to a hot chick with an awesome rack, I don’t think I want to fly anymore. And who’s to say these well-endowed suicide bombers won’t also show up in shopping malls or sporting events? I think I may have spotted more than a few potential terrorists at the Grammys a couple of days ago.

The consequences of this new threat will weigh heavily on the bosom of the national security infrastructure. What new measures will they need to bust the terror plotters who embrace this tactic? And as we jiggle with our defense strategies, will the terrorists just play a game of tit-for-tat? The whole scenario is udderly unpredictable. There will be those who will attempt to knock down these warnings, but the knockers must not be allowed to cleave our resolve. The only way to respond may be to nip it in the bud. But one thing is for sure, we will need keep abreast of the new developments.

Thanks to Fox Nation for opening our eyes to the naked truth (and my apologies for the foregoing).

3 thoughts on “Has It Really Come To This: Boob Bombs?”