In a hilarious rant on Network Neutrality, HBO’s John Oliver delivers about as good an explanation of the concept as I’ve ever heard (video below). Even better, he calls out the corporations and special interests who are trying to co-opt the Internet for their nefarious purposes.

Oliver hits on every bullet point in the debate including how businesses are already deliberately obstructing access; how the FCC is headed by a former cable lobbyist; how our current system is delivering worse service than third world nations; and how the cable cabal is a working monopoly.

Oliver also notes that the public discussion on the issue is impeded by the inherently dull and technical subject matter, and how opponents of Net Neutrality are exploiting that by having figured out that “the way to do something evil is to put it inside something boring.” So Oliver has a suggestion about how to frame the debate, at least in terms of the yawn-inducing identifier “Net Neutrality.” 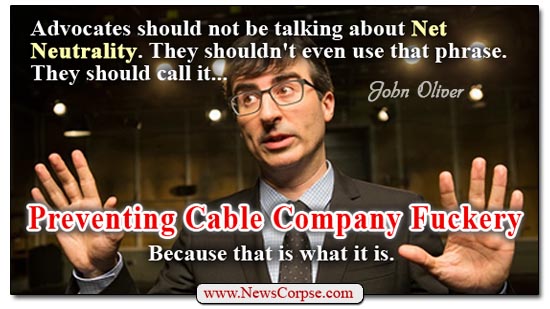 Something else you can do is to stop blindly supporting the corporations that are trying to kill the Internet (or usurp it to service their greed). Those of you who use AT&T or Verizon for your cell phone service (and that’s most of you) have another option. CREDO Mobile is a progressive company that supports an open Internet that doesn’t favor wealthy conglomerates who can afford to pay for special treatment and to suppress competition. They also fight for the environment, social justice, and a political landscape free of Tea Party idiocy.

It’s so easy to make the switch you’ll wonder why you never did it before. You’ll get great service and a selection of the best phones. You can keep your current phone number. And they will pay up to $350.00 for any early termination fees your current provider charges. You can even try it for thirty days with no obligation. You really need to check this out because there is no reason for your hard-earned dollars to be working against you by literally funding the Tea Party and the KeystoneXL pipeline and, of course Cable Company Fuckery. And if you use this link, you’ll even be helping News Corpse, who will receive a modest commission for the referral.

So please take this simple step to change the world and free yourself from the shackles of corporations who are working against you and your principles. You’ll feel great for having done so. And send this video (and this link) along to your friends and family as well. We can have a huge effect if we join together for something positive, rather than submitting to the corporate masters.