The arch conservative author and filmmaker, Dinesh D’Souza, has a shameful reputation characterized by dishonesty and immorality. He was forced to resign as the dean of a Catholic university due to his marital infidelity. More recently, he pleaded guilty to a felony charge of election finance fraud. As a veteran of right-wing punditry, D’Souza is a frequent guest on Fox News and is the writer and producer of the acidly anti-Obama crocumentary, “2016: Obama’s America,” based on his own widely debunked book, “The Roots of Obama’s Rage.”

On the eve of the publication of his new book, “America – Imagine a World Without Her,” D’Souza is once again demonstrating his affinity for the scum stuck to the bottom of the barrels he is scraping. The Washington Examiner posted some choice excerpts from a pre-release copy. While pitching the tome as “a passionate and sharply reasoned defense of America,” D’Souza has actually produced another tunnel-blind screed attacking his political enemies as villains on a mission to “finish off” America.

Lacking utterly in originality, D’Souza seizes on the old canard famously hyped by Glenn Beck, that that all contemporary liberals were weaned on Saul Alinsky. And like Beck and his diseased spawn, D’Souza casts Alinsky as some sort of horned demon sent by from Hades to destroy mankind. Consequently, the picture D’Souza paints of Barack Obama and Hillary Clinton is slathered with absurd invective that says more about D’Souza than it does the targets of his animus. 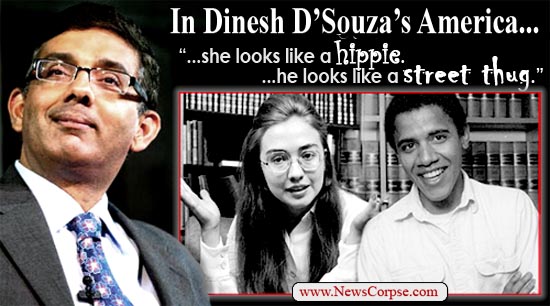 D’Souza: “If you see early pictures and video of Hillary, she looks and sounds like a former hippie. Overtime, however, Hillary started dressing like a respectable middle-class mother and speaking in a clipped, moderate sounding voice. Young Barack Obama, too, looked like a bit of a street thug — in his own words, he could have been Trayvon Martin. Over time, however, Obama started dressing impeccably and even practiced modulating his voice.”

It’s called growing up. Let’s set aside the repugnant and racist association of both Obama and Martin to thuggery. That’s standard rightist rhetoric. More revealing is that D’Souza is flabbergasted by the notion that American youths might conform to the fashion trends favored by their generation, but later mature and adapt to conventional styles more appropriate for business and public service. That evolution, in D’Souza’s mind, is not a natural part of growing up that millions of Americans experienced. He thinks it is an organized conspiracy to conceal subversive intentions beneath a veneer of respectability.

D’Souza: “Hillary and Obama both adopted Alinsky’s strategic counsel to sound mainstream, even when you aren’t. These are the ways in which our two Alinskyites make themselves palatable to the American middle class, which to this day has no idea how hostile Hillary and Obama are to middle-class values.”

So hidden under the pant suits and business attire are tie-dye, headbands, love beads and, of course, radical plans to replace the Constitution with the Communist Manifesto. And the fact that under Obama the economy has soared, Wall Street has hit new highs, corporations are earning record profits, and taxes are lower, the Tea Party contingent still believes that this administration is anti-capitalist. 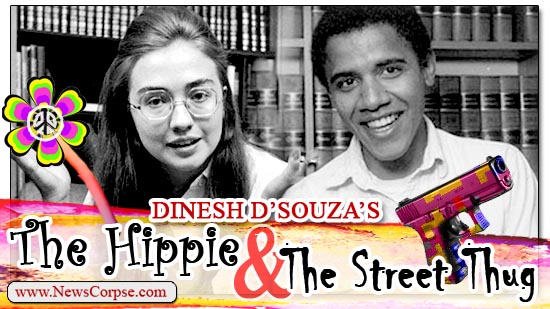 Finally, if anyone is hostile to middle-class values, it’s D’Souza and his confederacy of wingnuts who are opposed to universal health care, raising the minimum wage, unions, student debt relief, clean air and water, banking reforms, and virtually every other significant initiative that benefits average Americans.

10 thoughts on “D’Souza On Young Clinton And Obama: The Hippie And The Street Thug”