I just had to document this here because it so ridiculous and because Huffington Post has such a great video of it.

Bill O’Reilly confronted Sen. Tom Coburn on his show a few days ago because Coburn had the temerity to point out to his constituents that they should not believe everything they hear on Fox News. The issue specifically addressed an assertion that the health care bill had a provision that would sentence people to jail if they didn’t buy insurance. The truth is that the bill explicitly prohibits such criminal penalties.

However, O’Reilly went to the extreme of insisting that Coburn’s remarks were unfair because nobody on Fox ever said that the bill had such provisions:

O’Reilly: It doesn’t happen here, and we’ve researched to find out if anybody on Fox News has ever said “You’re going to jail if you don’t buy health insurance.” Nobody’s ever said it. So it seems to me what you did was, you used Fox News as a whipping boy when we didn’t qualify there.

Oh yeah? Tell that to PolitiFact who rated O’Reilly’s claim as a “Pants on Fire” lie. Or Media Matters who had no problem finding what O’Reilly’s researchers could not. Or the Young Turks who compiled the video evidence:

Once again O’Reilly makes an ass of himself. He even joked about Coburn’s “mistake” the following night with Dennis Miller. By that time both of them ought to have known that a multitude of people said that the bill could send non-payers to jail – even Glenn Beck said it on O’Reilly’s show! It just doesn’t get any stupider than that.

This is the network that had to issue a memo to its staff warning them of a zero tolerance policy for on air mishaps. And O’Reilly, in particular, frequently boasts that he has never made a retraction on his show. Of course not. He’s made hundreds of mistakes and told thousands of lies, but has never bothered to correct any of them. That doesn’t mean they didn’t happen. It just means that he’s comfortable disinforming his audience. And why mess up a perfect record by suddenly being honest? Although there was one prior incident of honesty for which O’Reilly deserves some credit: 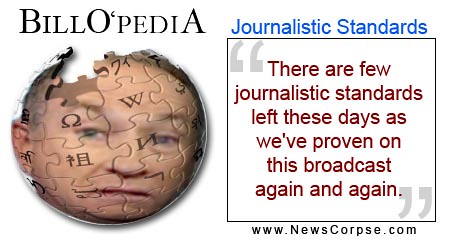 Thanks for the entertainment, Bill. I won’t wait around for a retraction.

[Hilarity Update:] O’Reilly began his program tonight with a Talking Points Memo about how NBC and Media Matters are dishonestly smearing him because of this health care/jail time controversy. He tried to exculpate himself from his assholiness with a tortured argument that went something like this: He claimed that all of the examples of Fox folks clearly saying that jail would be the penalty for not having insurance were made at a time when such a penalty was in the bill. But his assertion that no one ever said it was referring to the final bill which had no such penalty. He even played video clips of Obama and Pelosi that he intended as support for his contention that the penalty existed at some prior point in time.

There are only three things wrong with that. One, O’Reilly, in his remarks, made no distinction between different versions of the bill or time periods of debate. He simply made a flat statement of “fact” using unambiguous words like “never” that pretty strongly imply not ever. Two, there weren’t ANY drafts of the bill that had a jail penalty in it. NONE! So O’Reilly’s excuse is pure bullshit. And three, in the clips of Obama and Pelosi, neither of them said anything about such a penalty. In fact, responding to direct questions about it, they both explicitly declined to confirm that any such thing was in the bill or that they would support it. It’s surprising that O’Reilly even bothered to play the clips when they in no way supported his argument.

The bottom line is that O’Reilly is now lying to cover up his prior idiocy. This is something that he has gotten pretty good at over the years due to the many times he’s had to do it.