For several months now, Tea Partiers have been indignantly whining whenever anyone referred to them as Tea Baggers. Set aside the fact that they came up with the term themselves, when they discovered that it had another connotation, they insisted that they had nothing to do with it and accused those who used the term of everything from character assassination to sexual harassment. Many Tea-zers were convinced that it was a plot to destroy their movement that was being orchestrated by the media and the White House. How soon they forget… 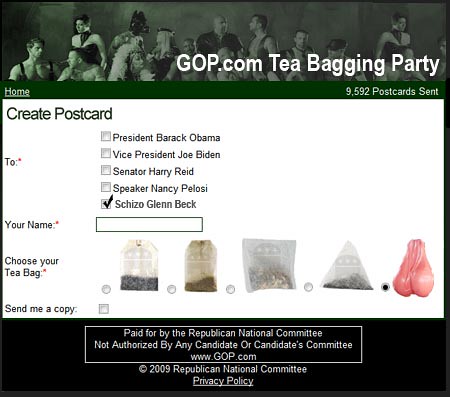 Well…no more. Some brave members of the crowd I call Tea Crusaders (because it aint no party), have decided to embrace the appellation they once regarded as vulgar. It may be more of a reach-around than an embrace, but whatever you call it, they are asserting a new-found pride and demonstrating that they have the balls to squat down for their beliefs.

This courage comes just as the Tea Baggers are descending on Washington to complain about liberals, taxes, and foreign-born, socialist presidents. It’s a big day in Teabagdom and an appropriate kickoff for their new commitment to an identity they previously scorned. And lest you think this is a prank dreamed up by mischievous lefties, the Rightosphere is giddily adopting the course correction and proudly declaring themselves to be proud Tea Bagging Americans. Fox Nation, Hot Air, and Andrew Breitbart’s BigGovernment, have all featured the coming out video.

So we should all wish them well as they march forward under the banner that best describes them. It took guts to embrace their nuts. Tea Baggers now and forever. Or at least until they decide to be offended again.