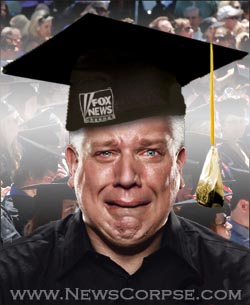 A week ago President Barack Obama gave the commencement speech at Hampton College in Virginia, and unleashed a torrent of criticism from the rightist punditry. Most of it centered around his warning that students not let themselves be overcome by the information overload of the Internet Age. But most of the speech, that was ignored by these critics, was uplifting, as was his conclusion:

“A dream of brighter days ahead, a faith in things not seen, a belief that here, in this country, we are the authors of our own destiny. That is what Hampton is all about. And it now falls to you, the Class of 2010, to write the next great chapter in America’s story; to meet the tests of your own time; to take up the ongoing work of fulfilling our founding promise. I’m looking forward to watching.”

I wonder what the reaction will be to Glenn Beck’s commencement speech at Jerry Falwell’s Liberty University. When Beck’s engagement was announced I noted the good fortune of LU’s student body for having secured an alcoholic, drug-abusing, rodeo clown, college dropout to inspire the graduates by advising them on how to succeed in life by making goofy faces on TV while lying about your political adversaries.

Beck did not disappoint. His speech was a litany of cliched platitudes (Turn the other cheek) mixed with attempts at humor (Taxicabs smell worse in the summer). And for someone whose grasp on reality is tenuous, he may have been engaging in a little projection at times (Your job is to remember who you are). But here are a few notable excerpts, presented as advice that he intended to give to his daughter as she entered college (but never did), that are surely going to inspire these young folks for years to come:

Life is hard. And then it gets harder. And then you die.

There are no coincidences in life. Look for them.

Only date those who love you as much as I do.

[Weeping] Only date those who will treat you as I have tried.

Anyone who wants to take your choice away is evil.

I’m not quite sure how you go about looking for coincidences that don’t exist. And I’m pretty sure his admonition about those taking away your choice doesn’t apply to his daughter or any other woman. And tonight I will likely stay awake wondering how to sleep harder. But I don’t envy the LU grads who will have to bear with the memory of this spectacular loser sobbing through his embarrassingly bad remarks.

How will these young people evaluate their prospective dates based on the criteria supplied by Beck? This could have been dismissed as a joke except that it brought him to tears as he said it. And of what use is it to a graduating class, who are looking forward to a boundless future, to draw their attention to shooting and killing? This is the same Glenn Beck who bristles whenever he is accused of inciting violence.

A commencement speech is supposed to be the highpoint of one’s academic experience and something that will last as a cherished memory. But this will have the lasting power of a chunk of Limburger that managed to roll unnoticed under the sofa to ferment for a few weeks. I think I would rather ride in a taxicab in the middle of summer than have to sit through Beck’s speech again.