There are far too many political charlatans, deceivers, and opportunists in contemporary public life. But there is only one Mistress of the Grifters who could publish a thoroughly revolting screed that pretends at times to be concerned about the welfare of suffering children, but repeatedly turns that feigned concern into a vitriolic, self-serving tirade aimed at her eternal enemy, President Barack Obama. 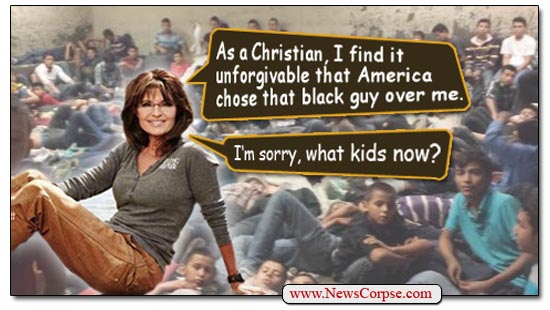 Never mind that the American people rejected Sarah Palin and her veep-daddy, John McCain, in a glorious rout, and that Obama repeated that electoral success four years later. Palin thinks she knows what’s best for the nation that hates her. And today she demonstrated how insensitive and unscrupulous she can be. Her latest Facebook harangue will long serve as a benchmark for deranged ranting. Here are some excerpts from Palin’s twisted take on the plight of immigrant children who are being warehoused in border states awaiting some way to resolve what is a dismal and daunting problem:

“Finally, they have won me over. I actually agree with the liberals’ war whoop. I, too, demand that this issue of young illegal aliens flooding across our border into horrendous conditions be taken care of. Now!”

Sadly, Palin’s solution begins with denouncing the President’s allocation of funds to improve conditions for the children. She apparently prefers to let them languish in 90+ degree heat and sleep on concrete floors. She does, however, offer own advice for allocating relief funds saying that

“The primary expenditure we need to supply in this humanitarian crisis is jet fuel to fly these children back home.”

This is what Palin regards as a serious response to a humanitarian crisis. Who does she think will greet these kids at the airport in whatever country they came from? And there are thousands of kids from many different countries, so we’d need a fleet of jets with different itineraries. Then, according to Palin’s plan, they would be shoved out of the plane onto the tarmac. Maybe we could save even more money by throwing them out midair with parachutes.

Palin continues in a mocking mode as a “bleeding heart compassionate woman and mother,” who sees some sort of plot here that involves both ObamaCare and the NSA spies. But most of all, it’s a socialist trick to redistribute the wealth from hard-working patriots to greedy urchins seeking handouts.

“Expect to see hundreds of thousands of another country’s children walk right through our welcoming open border, counting on America’s families to render all aid. We owe it to ourselves to be prepared – so, work even harder, working class, while our President uses his trustworthy discernment to redistribute your paycheck, because it IS for the children.”

Palin is profoundly moved by this crisis and says of those who ignore it that it “proves you are heartlessly oblivious to the plight” But wait until you read what she regards as the nature of the crisis:

“As a Christian I find it unforgivable to ignore this issue of overrunning border security into these conditions in southern states, and this one issue is just about driving me to renounce my Republican ties because, see, even leaders on the RIGHT side of the aisle haven’t exerted all Constitutional power to stop the madness.”

So it isn’t the suffering of children in dreadful conditions that offends her Christian values. It’s lax border security because, as we all read in the Bible, “Thou shalt build a wall to close the borders and leave the children to starve.” And she’s so disturbed that she is even contemplating a separation from her Republican comrades. She then beseeches both parties to take a stand on the issue. And again, she helpfully defines the issue for us:

“Hang on to your hat, because here’s the issue: Barack Obama has orchestrated this newest ‘crisis’ in order to overload the system with the intention of ‘fixing’ the problems his own policies create – by fiat, and that infamous phone and pen; screw the rule of law.”

Once again, the issue isn’t the children. And this time it isn’t even the border. It’s Obama! You know, the Stalinist oppressor who was elected twice and continues to fight for reforms that the American people broadly support (e.g. immigration reform, gun control, protecting the environment, raising the minimum wage, and equal rights for women, minorities, and gays). For this Palin labels Obama a tyrant:

“Congress and American voters, how long will you let Team Obama get away with this? The recent avalanche of devastating crises caused by a president believing he is above the law has set the most dangerous precedent a once-free people can imagine. To encourage and reward lawlessness by refusing to enforce the will of the people as proven by laws passed by our political representatives is the signature of a tyrant. In this case, Obama’s refusal to enforce immigration laws and his blatant suggestion that his chosen illegal activity will be rewarded are proof of his tyrannical tactics.”

Palin closes with an appeal to citizens – not to get relief for the children – but to vote out the “Team Obama” fiends who dare to search for workable solutions to vexing problems. But that’s really her second choice. What she really wants is…

“So, how much more will you take, Congress and We the People? I sense not enough guts in D.C. to file impeachment charges against Team Obama for their countless documented illegalities.”

Of course, that’s what Palin and her ilk have wanted since January 20, 2009. They have never accepted the legitimacy of Obama or the mandate that he has received twice. Her idea of “We the People” is a narrow swath of white, ultra-conservative, Christians, rather than the actual voters who have had their say. And now for her to position this heartbreaking situation with innocent kids in an unconscionable quandary, as just another opportunity to call Obama a tyrant, advocate for his impeachment, and beckon her disciples to the voting booth, is repulsive in the extreme. This goes way beyond her ordinary repulsiveness. But you have to give her credit for always managing to find a new low.

8 thoughts on “Sarah Palin Proves: It Takes A Village Idiot To Exploit The Suffering Of Children”