Last week a tsunami of shock washed over the Washington press corps as the second highest Republican in congress was swept overboard in a primary race against an unknown Tea Party opponent. Eric Cantor’s embarrassing loss has sparked debate as to how such a powerful GOP leader could have been caught looking. Unfortunately, the media contribution to the debate is rife with speculation and error. 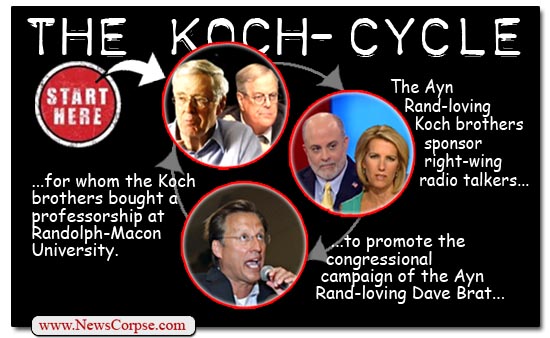 First off all, the characterization of Cantor’s opponent, Dave Brat, as an outsider who sprung from the grassroots to slay Goliath is a reflection of the shallowness of the research conducted by the mainstream media. Thom Hartmann went deeper and discovered that Brat was on the radar of the billionaire Koch brothers long before he launched his allegedly underdog campaign. Koch-affiliated financiers endowed Randolph-Macon College with half a million dollars to seat the Ayn Rand disciple as a trickle-down economics professor. Then, when the campaign commenced, radio talk show hosts like Laura Ingraham and Mark Levin took the baton and fervently promoted Brat’s candidacy. Ingraham and Levin are just a couple of the radio talkers who are sponsored by Koch front groups like Americans for Prosperity.

This brings us to the second point. The media repeatedly cast a spotlight on the campaign spending differential between Cantor and Brat. Cantor raised more than $5,000,000 compared to Brat’s $200,000. Many reporters latched onto the amusing anecdote that Cantor spent more on steak dinners than Brat spent in total. However, what they failed to take into consideration was the value of the airtime contributed by the likes of Ingraham, Levin, Beck, Limbaugh, Fox News, et al. It could cost a couple of hundred dollars for a thirty second spot on a high performing radio program. Extrapolate that to twenty or thirty minutes of direct advocacy by the the program’s host every day for a month or two and you could easily have exceeded Cantor’s budget for broadcast advertising.

Adding in the value of the donated airtime rips apart the third fallacy peddled in the press – that Brat’s low cost campaign disproves the contention that money makes the difference in elections. This is a target that has been in the sights of conservatives since the Citizen’s United debacle in the Supreme Court. The rush to exonerate wealthy donors of having any untoward impact on electoral outcomes was head-spinning. Every right-wing pundit with a microphone hailed the demise of the theory that cash-laden campaigns had an unfair advantage. In truth, Brat’s campaign was far richer than acknowledged due to the media support detailed above. But even if there were no other factors, a win by a single candidate in one race surely doesn’t negate the fact that in 99.99% of other races the better financed candidate prevails. If the right is so convinced that Brat’s showing proves that money doesn’t matter, I dare any of them to announce that they are halting their fundraising and capping their spending at $200,000.

Fourth: Tea Party supporters were quick to jump on Brat’s win as evidence of a Tea Party resurgence. In just about every other race this cycle, the Tea Party challenger lost to an establishment incumbent. With Brat’s resounding victory, they claim to have regained their mojo. But the only way they can make that argument is if they forget that they lost just about every other race this cycle.

Finally, the Washington set is dead certain that Brat’s triumph was due to his stance against immigration. After all, he did feature it in his campaign ads and it was a point of departure between him and Cantor. Unfortunately for those who seem to have a desperate yearning for that to be true, polling on the day of the election proved otherwise. Public Policy Polling released the survey showing that “72 percent of registered voters in Cantor’s district polled on Tuesday said they either ‘strongly’ or ‘somewhat’ support immigration reform.” And the anti-immigration forces conveniently ignore the fact that on the same day Sen. Lindsey Graham, an establishment, pro-immigration candidate, from an even more conservative state, handily dispatched a slew of Tea Partiers. More likely, the problem for Cantor was that he mustered only a 43% job performance approval, just a couple points off of his losing election results.

So Dave Brat won a peculiar contest in Virginia where he had hidden support from billionaires and an opponent who was widely disliked. Then he disappears and refuses to speak to the voters he hopes will be his constituents. It’s been three days and he hasn’t held a post election press conference. And yet the press continues to misrepresent the realities that produced the results of this election. It’s a state of affairs that proves that Cantor wasn’t the only loser last week. The voters and others who rely on the media to provide useful information and analysis also lost. But they should be used to that by now.