A new NBC/Wall Street Journal poll (pdf) has some decidedly bad news for President Obama. The American people, according to this survey, are losing patience with the President and expressing it with low opinions of his job performance, foreign policy, and leadership. It is a distinct concern for him as his administration heads into its final two years.

That said, the news isn’t all bad. But far be it for the media to put the results in context so that people get a balanced perspective of the nation’s mood. In addition to the floundering numbers, there are some areas that ought to produce some optimism for the President and those aligned with his policies. First among them is the fact that, while Obama’s numbers are nothing to write home about, his political rivals are doing so much worse that may want to run away from home. 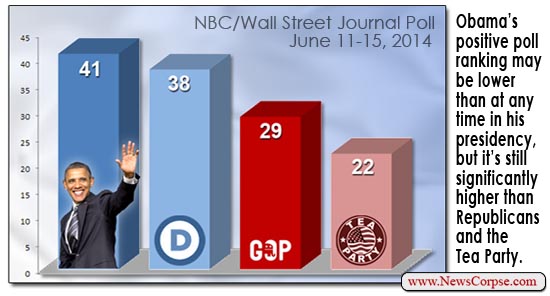 And that’s not all. When asked which party they prefer to control Congress, respondents chose Democrats over Republicans by 45% to 43%. The poll also reports that progressive positions on prominent issues are far more popular than those of conservatives. For instance, respondents support the Common Core education initiative 59/31. They believe that immigration helps rather than hurts the nation 47/42. They advocate action on climate change 61/37. They approve of Obama’s recent move to set strict carbon dioxide emission limits 67/29.

Clearly the electorate is in a bad mood, and they are taking it out, with justification, on their representatives. But when directly asked about solutions to the problems that affect them most, they consistently respond with agreement for the liberal agenda.

So why doesn’t the press report that? This is the so-called “liberal” media we’re talking about. Apparently they are not as driven by partisanship as right-wingers would have you believe with all of their childish carping. More likely the media is driven by ratings and revenue. In that regard, conflict and drama have always been a bigger draw than harmony. It’s the same reason that local news features murders and car chases, rather than more uplifting stories.

Obama has some work to do to counteract the effect of the relentlessly negative coverage he receives. Even the arrest of a suspect in the Benghazi attack drew absurd criticisms from Fox News and other wingnut media. But in the interim, it is important to look below the surface to see the whole story. And what this survey is telling us is that if Democrats run on progressive policies they are more likely to achieve success at the polls later this year and in 2016.

5 thoughts on “GOPee Yew: What The Media Isn’t Telling You About Obama’s Poll Numbers”