Last week News Corpse published a story detailing the hypocrisy of Fox News for hyperventilating over allegations of lost emails by the IRS when they said nothing about millions of lost emails by the Bush White House during investigations of improper firings of U.S. Attorneys and the outing of covert CIA agent Valerie Plame. Even worse, one of those bashing the the Obama administration was Fox News host Dana Perino who, at the time of the Bush email affair, was Bush’s press secretary and personally defended losing the emails.

Now the web of hypocrisy is growing even wider. Darrell Issa, chairman of the House Fake Scandal Committee, has been leading the attack on President Obama over the missing IRS emails, despite the fact that there is not a shred of evidence that the President was in any way involved with the email or the broader IRS controversy over the scrutiny given to political groups applying for tax-exempt status. Issa recently convened a hearing specifically to investigate the lost emails and declaring that the administration has “some ‘splainin’ to do.” 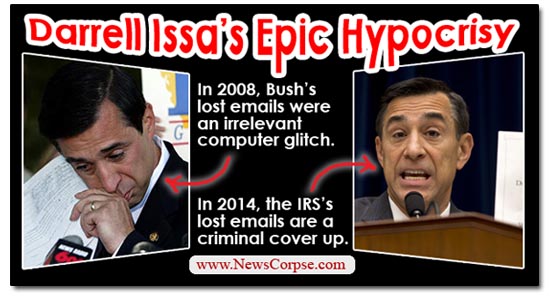 It’s rather amusing that Issa is taking such a hard-line stance on the matter since it is such a distant position from the one he held in 2008, when he sought to dismiss any notion of scandal by blaming the computer software used to archive the email. Mother Jones reported at the time that Issa…

“…did his best to play down the extent of the Bush administration’s now well-documented email archiving problems. Defending the White House’s decision to switch from the Lotus Notes-based archiving system used by the Clinton administration, Issa compared the the software to “using wooden wagon wheels” and Sony Betamax tapes.”

Issa accused then-committee chair Henry Waxman of leading a “fishing expedition” and telling Waxman that “You have no mandate to go Peeping Tom into every piece of information.” Considering Issa’s multiple investigations into the IRS, ObamaCare, immigration, and, of course, Benghazi, if Waxman was a Peeping Tom, then Issa is an acutely perverted stalker with dangerously sociopathic tendencies.

In other IRS email related news, Ed Henry of Fox News raised the issue at a White House press briefing when he asked outgoing press secretary Jay Carney “What happened to Lois Lerner’s email?” Carney’s answer should be the benchmark for any further inquiries by Issa or any other agent of the Republican inquisition. Carney said…

“IT professionals worked to restore Lerner’s hard drive but were unable to do so. Nonetheless, the IRS has or will produce 24,000 Lerner e-mails from this 2009-2011 time period largely from the files of the other 82 individuals. So I think that answers your question that they are engaging in an effort to find e-mails in the absence of being able to restore the hard drive. […]

“Chairman Camp, as you know, requested e-mails to and from the White House. We were asked if we would produce them; we did, in fact, do a search for all communications between Lois Lerner and any person within the Executive Office of the President for this period. We found zero e-mails — sorry to disappoint — between Lois Lerner and anyone within the EOP during this period. We found three e-mails where a third party e-mailed both Lois Lerner and officials within the EOP. One was a spam e-mail and two others were from a person seeking tax assistance. Each of these e-mails has been produced to Congress.”

So the administration has taken extraordinary measures to retrieve the missing emails. They have searched servers and the computers of possible recipients. They have done everything that the harpies on the right have been badgering them to do. And they have had some measure of success in that they recovered and delivered tens of thousands of emails from the time period requested. What more is expected of them?

Obviously, the critics in congress and the press don’t really care about results. They only care about stirring up controversy and fake outrage. That’s how Dana Perino can defend her boss, George Bush, for losing millions of emails and then hammer the IRS for a similar problem. And that’s how Darrell Issa can dismiss Bush’s email disappearances as a computer glitch, but accuse Obama of engaging in a criminal cover up. And the only reason they get away with it is because the media doesn’t do their homework and inform the public in a fair and thorough manner. And making it worse is that some in the media (e.g. Fox News) deliberately misinform the public to advance their partisan agenda.