We at News Corpse will risk life and limb to ride the rapids of the ridiculousness that emanates from Fox News, but there are times when the flow is difficult to keep up with. At times like these it may be necessary to compile some of the most significant stories into one article. But rest assured, we will always persevere in order to bring you, our readers, the critical information that you need to get through your busy day. You’re welcome.

First out of the gates is a ripe bit of nonsense from pizza magnate, and former GOP presidential front-runner, Herman Cain. Cain spoke at the Faith and Freedom Coalition’s Road to Majority conference last week. This is an affair produced by Christian Coalition founder, and Jack Abramoff accomplice, Ralph Reed. The competition for “Most Ludicrous Comment” is stiff at this conference that hosted rightist luminaries like Michelle Bachmann, Ted Cruz, and Rick Santorum. It’s the classy sort of gala where one can find Obama figurines in urinals. But it was Cain who came away with the zinger of the week:

“I have even heard people say, ‘Well I don’t vote because I don’t know what’s going on.’ And I say good. Stupid people are ruining American and I’m glad some of them stay home. The solution is real simple folks. Those of us who are informed have got to out-vote the stupid people.”

Exactly! What this nation needs is more people like Herman Cain deciding America’s fate at the polls. After all this is the man whose encyclopedic knowledge of the world gave birth to the state of Uzbeckibekistanstan. And the coverage of Cain’s comedy routine at the conference provided additional examples of the not-stupid by the geniuses at Fox Nation: 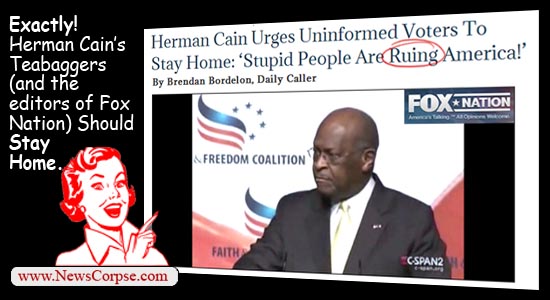 The Fox Nationalists also reached out to their ideological allies at Infowars, Alex Jones’ ultra-fringe conspiracy theory website, to find an article that alleged that border agents were resigning en masse over their objections to foreign-born gang members being allowed to freely invade our peaceful, white, Christian neighborhoods. These alleged gangsters were reputed to be coming from the ranks of the immigrant children being housed at federal facilities while awaiting deportation or unification with their families. 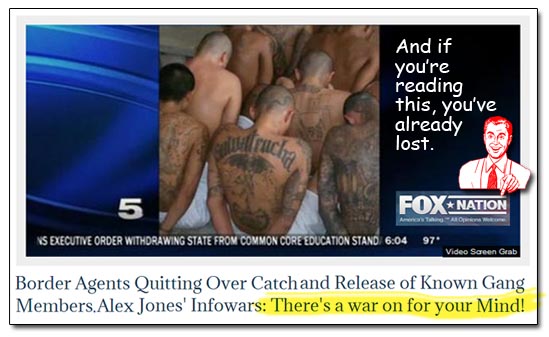 The problem with this story is that the local newscast from which it was derived interviewed a border patrol union official who said only that some of his agents were suffering from low morale and were looking for other jobs, but that none had quit. He was also asked how many gang members he estimated were crossing the border. His answer was “A few, not too many,” thereby dispensing with the whole false premise of the article. And the photo in the Fox Nation posting is of gang members in Central America who have nothing to do with the current crisis of minor children immigrating unaccompanied into the U.S.

But what’s really troubling is that the Fox Nationalists saw fit to cite Infowars as the source for their disinformation. And this isn’t the first time. They have previously sourced articles to Infowars with similarly absurd reports. For instance:

Finally, Fox News has shamelessly exploited the terrorist attack in Benghazi for their craven political objectives. In the process, they have tried to cast Hillary Clinton as responsible for the tragedy and uncaring about the consequences. However, it is Fox, and their right-wing cronies, who have sullied the memory of those killed in the service of their country. Fox, and their GOP pals, has even used the deaths as a means of raising money for Republican organizations.

Now another example of that callousness is on display on Fox Nation. Jason Mattera, a blitheringly idiotic wingnut who has carved a reputation out of embarrassing himself by attempting to embarrass others in foolishly contrived ambush videos, makes an appearance in a new video where he approaches Hillary Clinton at a book signing. When Clinton asks for his name, Mattera asks that she make it out to Christopher Stevens, the murdered ambassador who was also a friend of Clinton’s. Clinton refused his crass request and politely dismissed him saying “I think it would be great if you read.” the book. Mattera then made a couple of snarky remarks about Clinton’s security, who quickly ushered him away. However, he did successfully demonstrate how to disparage the memory of fallen patriots in pursuit of self-serving publicity.

And that’s today’s episode of the Fox Nation Follies. We hope you enjoyed the parade of repugnant imbeciles that populate the Fox newsroom. And with any luck, Herman Cain’s vision for America will come to pass and the sort of dimwits who make up the Fox News/Tea Party audience will stay home in November and stop wrecking the country for the rest of us.