For several months Glenn Beck has been promoting an event in Washington, D.C., that he pretends has something to do with Restoring Honor for American soldiers. In fact, the event was originally announced as a launch party for his next book, “The Plan,” a 100 year blueprint for taking the country back a hundred years, to a time when civil rights were only meant for wealthy, white, male citizens. Beck later transformed the affair into a phony military charity that won’t pass on any benefits until the costs of the rally are covered. This way he gets to have his book launch paid for by dupes who think they are supporting the troops. 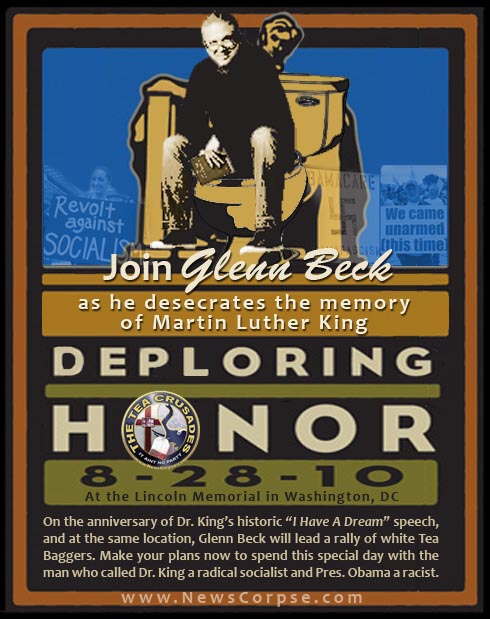 Beck scheduled his Tea Bag rally for the same date (August 28), and location (the Lincoln Memorial) as Martin Luther King’s historic “I Have A Dream” speech. By exploiting this profound anniversary, Beck is desecrating a cherished memory of an inspiring American leader. Last March I wrote about this project and wondered, where is the opposition?

“This is the man [Beck] who recently called King a ‘radical socialist’ and questioned whether there should be a holiday in his name. This is the man who called President Obama a ‘racist with a deep-seated hatred for white people.’ This is the man who calls progressives (like King) “the cancer in America.’ The thought of Beck usurping this cherished occasion to further the goals of his Tea Bagging 9/12ers is insulting and unacceptable.

So where is the outrage? Where are the guardians of Dr. King’s legacy? Who will organize an event in our nation’s capital on that day to honor the real meaning that it represents? Will Beck be permitted to tarnish this anniversary with his exclusionary fear mongering and conspiracy brigades?”

Apparently not. At a meeting of the National Newspaper Publishers Association, several prominent African America leaders have taken up the cause to preserve the memory of Dr. King and the meaning of this anniversary. Here are some of the comments from the meeting:

Marc Morial, President, National Urban League: “We’re going to get together because we are not going to let Glenn Beck own the symbolism of Aug. 28th, 2010. Someone said to me, ‘Maybe we shouldn’t challenge him. Maybe we should just let him have it.’ I was like, ‘Brother, where have you been? Where is your courage? Where is your sense of outrage?’ We need to collaborate and bring together all people of good will, not just Black people, on Aug. 28 to send a message that Glenn Beck’s vision of America is not our vision of America.”

Ben Jealous, President, NAACP: “A group of White males wealthier than their peers called the Tea Party has risen up in the land. They say that they want to take the country back. And take it back they surely will. They will take it back to 1963 if we let them.” […] “We will be fighting Glenn Beck on Aug. 28th and we will be using that to leverage the second march [on October 2nd, for jobs and justice].”

Rev. Al Sharpton, President, National Action Network: “…there is no way in the world that I am going to allow [Beck] to have more people there than us. I hope every Black person in the country will help us to challenge this. Everybody’s got to be in Washington. We can’t let them hijack Dr. King’s dream.”

This is precisely the kind of push-back that is needed. It’s great to hear that these leaders are committed to challenging Beck. I haven’t yet seen any manifestation of their efforts outside of these remarks at the newspaper publisher’s event, but if they follow through with this level of intensity, they could turn this August 28th from a farce populated by Beck, Sarah Palin, and a throng of paranoid conspiratorialists, into a remarkable and inspirational day.

Feel free to contact these organizations and let them know that you support their efforts to challenge Beck. Then work to help produce a large turnout in Washington of people who want a true restoration of honor and justice, and the principles advocated by Dr. King.