Much of the routine disinformation and scandal mongering that is the core of Fox News programming is designed to produce melodrama in order to enrapt their dimwitted viewers and warp their grasp of world affairs. It is key to the editorial philosophy of Fox’s chairman and CEO, Roger Ailes, who conceived the “Orchestra Pit” theory of journalism. 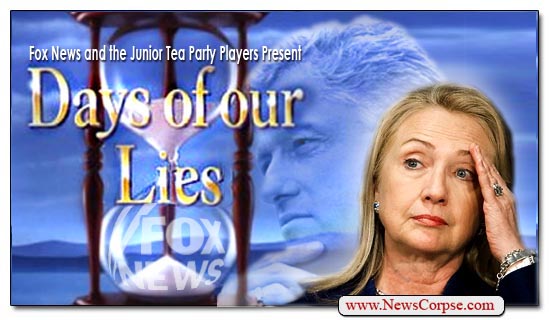 So it is no wonder that Fox would recruit Edward Klein, an author so disreputable that he has been renounced by a broad range of critics, both liberal and conservative. As an example of his derangement, he once wrote that Chelsea Clinton was the spawn of Bill after raping his lesbian wife, Hillary. Now, in an editorial for Fox titled “Hillary down in the dumps: Is Clinton about to drop out of 2016 race?”, Klein delivers an account of a conversation between Bill and Hillary Clinton to which he could not possibly have had access without having hidden in the broom closet. Here is the opening scene:

“During a recent break in her national book tour, Hillary Clinton sat at her kitchen table in Chappaqua, N.Y., rubbing her forehead. She had been experiencing splitting headaches and was finding it increasingly difficult to hide the throbbing pain in her head while doing television interviews.”

From his vantage point in the closet, Klein managed to observe Clinton alone in her kitchen nursing her headache and sinking into despair. His representation of her mood is in stark contrast with the video evidence of her media interviews where she appears to be engaged and upbeat. Klein also contends that she is depressed because her book is an historic flop. However, that is also contrary to the facts. But the real drama has yet to begin.

Enter Bill Clinton, who Klein apparently observed as he “poured Hillary a glass of green tea, and massaged her shoulders.” Then, in the privacy of their kitchen, unaware of the guest in the closet, they began to discuss the hardships of her book tour and prospective presidential campaign. And for some reason they chose to speak in a dialog that emulated junior high school playacting. Here is the script exactly as Klein “heard” it:

Hillary: The media have me in their cross-hairs. Everything I say is twisted and used against me. I can’t get any traction. They are pouncing on everything I say.

Hillary hesitated for a moment, and then continued.

Hillary: I’m seriously losing my appetite for combat. I never thought I’d say that. I’ve been a fighter all my life. You guys have never seen me back down, but right now I am punch drunk.

Bill bit his lip and said…

Bill: We all have a right to feel sorry for ourselves from time to time. But you’ve got history to make.

Hillary: Right now I’m feeling like they can all go f**k themselves. I know the country needs us, but they aren’t acting like they deserve us. Just f**k ‘me (sic).

Bill: We’re going to fight and win the White House. That will be our reward and our revenge.

It would be one thing if this was a fanciful dramatization of a conversation that Klein imagined might have taken place. But he is offering it as a factual account of an actual discussion between two people in their own home. And Fox News was so impressed with its veracity that they went ahead and published it. But anyone who believes that this is how adults talk, particularly Yale-educated lawyers with decades of political experience, is flakier than a day-old croissant.

It’s pathetic that Fox would post this nonsense, but it’s even worse that they know their audience so well that they can have a fair measure of confidence that it will be accepted as reality.