This week has been a festival of Republican derangement on a scale that is impressive for its magnitude and breadth. A party that is notorious for inane policies and political stunts has really knuckled down and exceeded its previous masterworks of idiocy. And it starts at the top with GOP House Speaker John Boehner. 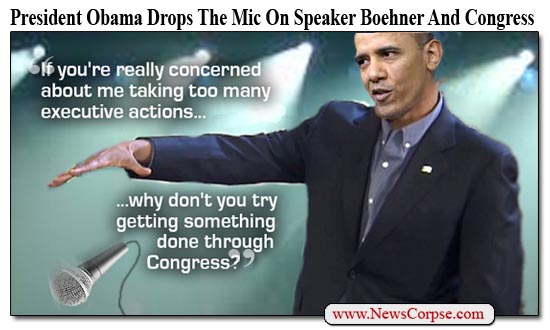 This week John Boehner leaped to the front of the pack by announcing the Tea Party’s wet dream of a lawsuit against President Obama for abuse of power and political overreach. However, when asked precisely what actions by the President were going to be the basis for the litigation, Boehner responded “When I make that decision, I’ll let you know.”

Next up we have Darrell Issa, chairman of the House Phony Scandals Committee. This week he appeared on Megyn Kelly’s Fox News program to discuss the IRS and said of Lois Lerner, without qualification, that “Of course she broke laws and of course she broke regulations and we need to hold her accountable.”

That is a remarkably irresponsible position to take for someone who is ostensibly undertaking an investigation with the pretense of relying solely on the facts. But when Issa was challenged Sunday by CNN’s Candy Crowley as to whether he had any proof of wrongdoing by Lerner, the IRS, or the White House, Darrell Issa said “I don’t play the game of ‘no evidence.'” Just let that one sink in for a while.

Enter Fox News super-pundit Charles Krauthammer. Old Chuckie Sleaze visited with his Fox colleague Greta Van Susteren this week to pontificate over the Supreme Court decision on presidential recess appointments. Krauthammer opined that the court’s rebuke was proof that Obama is a lawless tyrant who rules by fiat. And then he introduced the “I” word saying that “If this were a Republican president, he’d be impeached now over all of these abuses.”

The problem with Krauthammer’s analysis is that Republican presidents have been far more generous with their recess appointments than Obama. Since 1981, Ronald Reagan led the field with 232. He was followed by Bush, Jr (171), Clinton (139), Bush, Sr. (78), and then Obama trailing with a mere 32 recess appointments. So Krauthammer’s speculation about what would happen to a Republican couldn’t be more wrong.

And saving the best for last, GOP Reps. Bill Flores and Louis Gohmert (aka Flo-Mert) have drafted legislation that would pay a million dollars to anyone who can provide the emails that were allegedly lost by Lois Lerner. Setting aside the fact that there may not be any lost emails at all because they may have been retrieved from servers or files residing with the recipients, Flo-Mert’s bill is epically idiotic.

First of all, they are essentially outsourcing their duties to unknown persons who they are enticing, via greed, to produce evidence of crime. That can result in unscrupulous individuals manufacturing evidence or breaking the law to acquire it. Secondly, they are proposing to spend taxpayer money on a purely partisan activity. Thirdly, they are conceding that they are too incompetent to do their own jobs. Fourthly, they are implying that there is a conspiracy to conceal the emails that can only be broken by cold, hard cash. And lastly, they included a provision in the bill to cut the salaries of all IRS employees by 20% until the possibly non-existent emails are turned over to Congress. That would punish people who have nothing to do with the matter, not to mention everyone in perpetuity if, in fact, there are no lost emails to recover.

This brief collection of Republican stupidity demonstrates how seriously devolved the GOP (Greedy One Percent) have become. They appear to have entirely stopped trying to be a reputable political enterprise and are competing to see who can be the imbecile of the week (although it will be hard to beat the inimitable Fox News “Psycho” analyst, Keith Ablow). But stay tuned as the contest continues and new aspirants arise to challenge the old hands. This is entertainment at its best.