It takes a remarkably obstinate personality to insist on a position even after acknowledging that the position is false. But that’s precisely what the editors at Fox Nation did when they reported on an exchange between Jonathan Karl of ABC News and Josh Earnest, the White House Press Secretary. 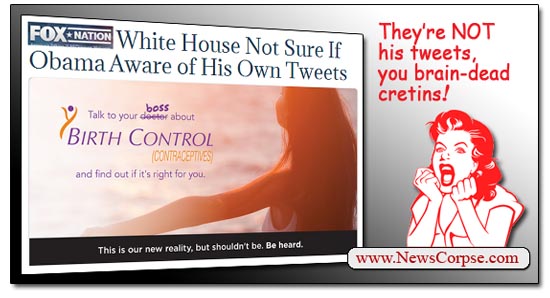 For more blatant lies from the Fox Nationalists…
Get Fox Nation vs. Reality. Available now at Amazon.

At yesterday’s daily press briefing, Karl sought to determine whether President Obama was responsible for, or aware of, a tweet that was posted by Organizing for America [OFA], a political enterprise that was spun off of the Obama campaign for the presidency. In his preface to the question he appeared to already know the answer, but persisted with his contrived query anyway.

Karl: The President’s tweets – those tweets that go out @BarackObama – I understand those that aren’t signed “BO” aren’t directly written by him. Does he even read the others, does he know they’re going out? Are they reviewed by senior people at the White House or is that just simply OFA doing something on his behalf?
Earnest: The @BarackObama Twitter handle is maintained by OFA. That is the political organization that was the offshoot of the campaign, and that is a Twitter handle that is maintained independent of the White House.

That’s about as clear as it can be said. OFA is an independent operation that is not run through the White House. Neither the President, nor his staff, is responsible for what it posts, unless explicitly signed by the President. Yet somehow the editors at Fox Nation plastered a headline atop this story that falsely states “White House Not Sure If Obama Aware of His Own Tweets.”

The severity of the cognitive disconnect here is magnified by the fact that the video they themselves attached to the story contradicts their own headline. So how can they post a video that declares in absolute terms that these are not the President’s tweets, and still call them his tweets in bold type? Simple. They’re shameless liars. What’s more, the source for the story is the disreputable, GOP-run, Koch brothers affiliated, phony news service, the Washington Free Beacon. They are a brazenly biased organization for whom spreading lies is an integral part of their mission. With deception and disinformation being such an important facet of these operations, you would think that they would be better at it.

The article went on to further discuss the content of the tweet despite having already established that the President had nothing to do with it. In the process, the White House was able to reinforce their position in opposition to the Supreme Court’s ruling in the Hobby Lobby case that elevated the rights of a corporation’s religious beliefs over those of the human beings who work for the corporation.

Karl: The tweet I’m gonna ask you about is after the Hobby Lobby decision, it’s a “Throwback Thursday” tweet: “Throwback to last week when a woman—not her boss—made her own decisions about her health care.” Does the president believe that because of the Hobby Lobby decision, women are not allowed to make their own decisions about their health care unless they consult with their boss?
Earnest: That is certainly true of women in some cases, and that’s the concern that this administration has. That the consequence of the Supreme Court ruling is that it will allow bosses to interfere with what the President believes should be the freedom any woman has to make her own decisions about her health care.

While Earnest handily disposed of the clumsy and argumentative question by a reporter who has repeatedly demonstrated his political prejudices, the truly pathetic part of this is the manner in which it was framed by the Fox Nationalists and their pals at the Free Beacon. These folks should try to comprehend the stories they cover before making fools of themselves by authoring articles that are contradicted by the story’s content.