When you’ve got absolutely nothing with which to criticize your political opponent, then resort to childish and sexist personal insults. That’s the Republican strategy for taking on Hillary Clinton’s possible campaign for the presidency. 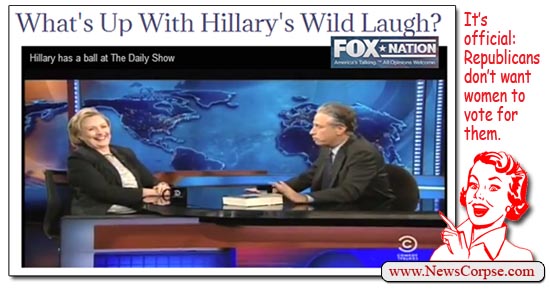 The Fox News community website (and lie-riddled propaganda rag) Fox Nation proudly posted a video compilation of Hillary Clinton’s appearance on The Daily Show Tuesday that consisted of only her laughing at Jon Stewart’s jokes (video below). This is the best evidence yet that right-wingers have completely run out of ideas and have concluded that their only hope of beating Clinton, should she run, is to act like snotty little brats by making fun of irrelevant personal traits.

This should also help to drive away virtually every woman voter from the transparently anti-woman GOP. It’s not enough that Republicans want to deny reproductive health care, allow corporations to come between women and their doctors, vote against equal pay, oppose non-discrimination, cut funding for single mothers and day care, and just this week, advise Republican men to talk “down to a woman’s level.” Nope, now they have to lower the bar even further with lame insults.

Media Matters compiled a surprisingly long list of press references to Clinton’s laughter during the 2008 campaign. It was characterized as everything from a “cackle” to a “maniacal giggle,” but always in manner that was distinctly sexist. Comparing one’s laugh to witches and harpies is not something that would be done to male politicians.

The video posted by the Fox Nationalists was provided by the ultra-rightist Washington Free Beacon, a pseudo-news enterprise that is run by Republican operatives and affiliated with the Koch brothers. So the partisan parentage of this silliness is clear. It’s also clear that the people responsible were emotionally stunted at sometime around junior high school. If this is representative of the campaign tactics that Clinton will face if she decides to run, then she’s got an open path to the White House.

Here is the video from the Free Beacon’s edit of Clinton on The Daily Show:

And here is video of Fox News mocking Clinton’s laugh six years ago: