The compulsion of right-wing politicians and pundits to reflexively denigrate President Obama is once again outstripping their devotion to country or respect for the truth. It is uncanny how predictable it is that conservative blowhards will leap at the opportunity to bash the President, even as events of critical significance to our national security are still unfolding. 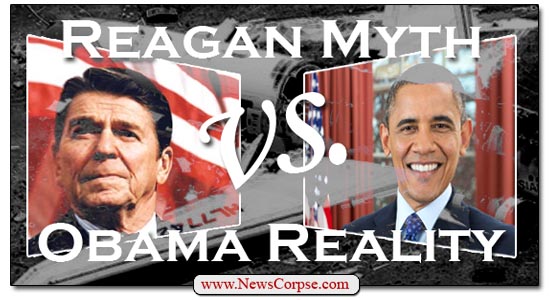 That is the case as information continues to be uncovered concerning the shooting down of Malaysian flight MH17 over eastern Ukraine. Some of the more obscenely irresponsible comments come from the usual suspects, such as…

John McCain: I don’t understand this president … this is what we used to call in the military AWOL. There’s a direct loss of American lives here.
Rush Limbaugh: I don’t want appear to be callous here, folks, but you talk about an opportunity to abandon the Obama news at the border?
Todd Starnes: Obama won’t comment on Malaysian jetliner crash until he’s had a chance to read tomorrow’s paper.

On Fox News there has been a specific effort to compare the response of President Obama to that of President Reagan following the shooting down of a Korean jet on September 1, 1983. Of course the Fox position is that St. Reagan acted quickly and boldly to assert America’s outrage and leadership. However, an examination of the facts present a very different picture.

The gist of the criticism hurled at Obama was that his reaction was too timid, too slow, and tainted by his decision to keep his previous obligations with meetings on his schedule. The evidence provided to illustrate the differences between Obama and Reagan was a video of an Oval Office address by Reagan regarding the Korean jet disaster.

The first notable fact that was undisclosed by the right-wing nags is that Reagan’s Oval Office address came five days after the Korean jet was shot down. The Malaysian jet was downed only yesterday but, according to his critics, that is still too long for Obama to have waited to comment. As for the video itself, the depth of Reagan’s outrage extended to his declaration that the attack was a “crime against humanity [that] must never be forgotten” and that the Russians “owe the world an apology.” That’s telling ’em, Gipper. Make them say they are sorry.

Compare that to Obama’s initial remarks that stated that the attack was “An outrage of unspeakable proportions,” and included a challenge to Russian President Vladimir Putin to make a decision whether to continue to support violent separatists.

Obama: Time and again, Russia has refused to take the concrete steps necessary to deescalate the situation. […] We have been very clear from the outset that we want Russia to take the path that would result in peace in Ukraine, but so far at least, Russia has failed to take that path. Instead, it has continued to violate Ukrainian sovereignty and to support violent separatists.

There you have it. Obama laid the blame squarely at Putin’s feet and reiterated his demand that Russia take concrete steps to deescalate. Additionally, Obama called for an immediate cease-fire and an end to Russia’s provision of weapons and training to the separatists. It is an unarguably more aggressive first-response than Reagan’s, but he didn’t ask Putin to apologize so he must be weak.

Fox News and other conservative outlets have also been criticizing Obama for not canceling a couple of previously scheduled fundraising events. But there are some very good reasons for not doing so. First of all, the United States president should not be seen as being so easy to manipulate that an isolated terrorist act, not directed at the U.S., can force him to alter his plans. We are not, and must not be, at the mercy of the terrorists. Secondly, the President made an obligation to the people that organized and attended the events and he should honor that unless his presence would prevent him from taking necessary actions elsewhere, which was not the case.

Furthermore, those making the Obama/Reagan comparison also failed to note that Reagan himself jaunted off to fundraising events shortly following the Korean jet attack. On September 14 he helped raise funds for the Republican National Hispanic Assembly. On September 20 he helped fill the coffers of South Carolina Senator Strom Thurmond. On September 27 it was a dinner for the Republican Majority Fund. Apparently it’s OK for St. Ronnie to engage in financial glad-handing after an international incident, but not a malingerer like Obama. For the record, less than a month after Reagan’s tour of GOP fundraisers, terrorists blew up the military barracks in Beirut killing 250 Marines. Can we say he was really on the job? Maybe Darrell Issa should open an investigation into that.

Perhaps the most peculiar change in the right-wing media due to the Malaysian jet attack is that it has soured the right on their former hero, Vladimir Putin. For months pundits at Fox News and elsewhere were singing the praises of Putin as the model of strength, leadership, and Christian purity. Folks like Ben Carson and Sarah Palin expressed their glowing admiration. There was even a featured article on Fox News that asserted that “Putin Is The One Who Really Deserves That Nobel Peace Prize.”

At this point it’s hard to tell who the right admires more: Reagan or Putin. But it’s clear that they have a visceral hatred for our current president. You know, the one who is charged with leading the nation right now, and for whom patriotism would ordinarily compel conservatives to support in troubled times. But for some reason, right-wingers have chosen to disparage their president at every turn and before they even have facts to form a credible opinion. Not that they ever cared about facts. For them it’s shoot first and ignore the facts later. God Bless America.

12 thoughts on “Myth vs. Reality: Reagan vs. Obama On Planes Being Shot Down”