Yesterday Sarah Palin demonstrated the world-class idiocy that has become the hallmark of her public persona. She pretended that she had predicted the current events in Ukraine, but her version of reality was unrecognizable to anyone who actually has a grip on it. To make matters worse, Palin popped in to Sean Hannity’s show to sop up some fawning validation from her Fox News colleague. 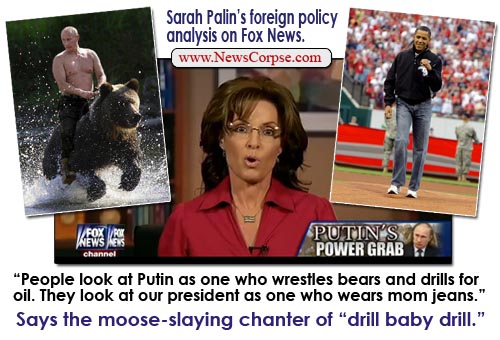 Hannity jumped in with praise for the phony Palin prediction, but it was Palin herself who dragged the whole segment into a pit of pitifulness. Her moronic stammering and belching of buzzwords was almost painful to watch (video below). She often didn’t even seem to know the meanings of the words she strung together, such as when she lambasted President Obama for weakness that she imagined in “the perception of him and his potency.” This may be the first time in history that a president’s potency has been discussed in public.

It went downhill from there, if you can believe it. In a non-sequitur response to a question from Hannity about whether Putin had designs on more than just Crimea, Palin lurched into an obviously prepackaged insult that she was determined to slip in, whether it was contextually appropriate or not. The alleged punch line went like this:

“People look at Putin as one who wrestles bears and drills for oil. They look at our president as one who wears mom jeans.”

Seriously? This is what passes for foreign policy analysis on Fox News? Palin didn’t bother to identify the people who she thinks look up to Putin. Most of the world sees him as an autocratic aggressor who is violating international law. There was no mention of the complexities of the regional dispute and ethnic division? Nothing about the pending sanctions or the suspension of G8 summit activities. Both Palin and Hannity failed to note the successful unification of the western allies against Russia’s aggression. Palin didn’t offer a single proposal of her own to resolve the situation. Nor did she notice that Obama’s proposals were in line with what every knowledgeable diplomat in the U.S. and our allies have had to say on the subject.

Instead, Palin’s juvenile taunt served to aggrandize Putin in her own image – he as a bear wrestler, she as a moose slayer. And they both loves them some oil drillin. Palin, along with most of her right-wing comrades have been heaping praise on Putin as a leader, while purposefully tarnishing the reputation of their own president in the midst of a serious crisis. This is behavior they fiercely damned during the Bush administration if anyone uttered an opinion that was the least bit derogatory about George W. What was regarded as treasonous in the previous administration is now a daily affirmation from the conservative pews, without regard to the damage it does to our national interest.