Last week Megyn Kelly of Fox News featured a segment that was crammed full of outrage over the bigotry demonstrated by the extremist ISIS brigade that is terrorizing much of Iraq. As ISIS marches through the nation that was fatally destabilized by George W. Bush and his confederacy of liars, any religious faction that is not aligned with the ISIS brand of Sunni Islam is dealt with brutally and mercilessly. This, of course, includes the Christians in the region. And it is the Christians for whom Fox News is solely concerned.

In a delivery dripping with fear, Kelly gravely reported on an alleged directive from ISIS that Christians in the city of Mosul “could leave, they could convert to Islam, or they could die.” This is certainly further evidence of the extremist intentions of the group and Fox News is correct to repudiate the threat as an assault on religious freedom.

However, there are a couple of problems with their newly acquired aversion to intolerance (a subject they generally dismiss as political correctness). For one thing, it never bothered them when conservative firebrand, and Fox News fave, Ann Coulter said pretty much the same thing, but with a somewhat different emphasis. 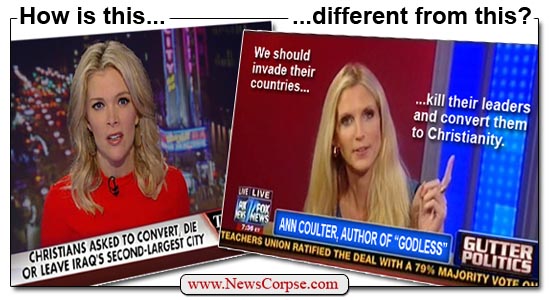 Coulter’s doctrine on Islam that “We should invade their countries, kill their leaders and convert them to Christianity,” is just as repugnant, bigoted, and hostile as that of the ISIS ultimatum. So why does Fox News tolerate hate-speech from Coulter that is identical to that of terrorist extremists?

It may help to understand the Fox editorial philosophy by noting that the “expert” Kelly solicited to analyze the events in Iraq was Tony Perkins of the Family Research Council, who immediately blamed President Obama for this rancid display of religious intolerance. In fact, Perkins and Kelly spent more time castigating the President than they did ISIS. This tells you who they really regard as their enemy.

Perkins, and the FRC, are notable for their place on the list of hate groups published by the Southern Poverty Law Center (SPLC). The FRC has been one of the most vicious opponents of the LGBT community. Their opposition is based wholly on their view that anyone who strays from the Christian dogma advocated by the FRC is deviant, sinful, harmful to society, and an affront to God. In other words, it is an entirely religious prejudice that condemns those with different beliefs. The SPLC’s report on the FRC begins…

“The Family Research Council (FRC) bills itself as ‘the leading voice for the family in our nation’s halls of power,’ but its real specialty is defaming gays and lesbians. The FRC often makes false claims about the LGBT community based on discredited research and junk science. The intention is to denigrate LGBT people in its battles against same-sex marriage, hate crimes laws, anti-bullying programs and the repeal of the military’s “Don’t Ask, Don’t Tell” policy.”

Despite their “Vision Statement” which calls for a culture in which “religious liberty thrives,” the FRC is unarguably a practitioner of religious intolerance. It’s sole purpose for existing is to rebuke those who fail to adopt their religious views. If a culture wherein religious liberty were thriving was truly their mission, there would be a place in it for those with whom they disagree. However, in that regard they are no different than ISIS.

It is telling that Kelly chose to invite the religiously intolerant Perkins to her Fox News program to discuss the religious intolerance of others. She might have considered people who are actually involved in anti-discrimination organizations, whose opinions would be more credible. That, however, would require her to violate the gospel of Fox News which demands strict adherence to right-wing, conservative, Christian principles. As I have noted previously…

Fox News is the closest thing in media to a Vatican PR office, with a roster that is heavily weighted with Roman-Catholics. They include: Bill O’Reilly, Sean Hannity, Megyn Kelly, Bret Baier, Bill Hemmer, Brian Kilmeade, Andrew Napolitano, Jeanine Pirro, Laura Ingraham, Dennis Kucinich, Elisabeth Hasselbeck, and Father Morris. Rupert Murdoch, the CEO of Fox News parent News Corp was himself inducted into the ‘Knights of the Order of Saint Gregory the Great’ by Pope John Paul II. And if that isn’t enough, the current Senior Communications Adviser in the Vatican’s Secretariat of State, Greg Burke, was previously the Fox News correspondent covering the Vatican, a position he held for ten years.

So remember this the next time you hear Fox News pretending to be the champions of religious freedom. Remember that their experts are actually bigoted hate mongers. Remember that their political commentators advocate genocide and ethnic cleansing. The only freedom that Fox News supports is the freedom to plaster the airwaves with lies and propaganda in the furtherance of the right-wing theocracy they hope to foist on America.

15 thoughts on “On Fox News: Religious Intolerance Is An Atrocity Unless It’s Practiced By Christians”