It’s taken four years, but the least productive Congress in recent history has finally found something they consider worthy of their time: Impeachment. The Tea Party Republicans running the House of Representatives have managed to avoid or deliberately obstruct everything from tax reform to job creation to immigration to climate change, and much more. In place of doing their actual jobs they have repeatedly attempted to cripple or repeal the Affordable Care Act (aka ObamaCare), deny women access to reproductive care, legislate their conservative flavor of religion, and conduct endless and unwarranted investigations into a slew of phony scandals.

The GOP has had help in their avoidance of their responsibilities. Fox News has been right beside them in diverting attention and tax dollars from useful services to wasteful partisan exercises. Specifically with regard to the Impeachment issue, it was a Fox News regular, Sarah Palin, who fired the most recent volleys.

Now Fox is setting its sights on bolstering the impeachment argument by orchestrating a campaign of propaganda to characterize President Obama as disloyal to the country. And they aren’t mincing words about it. 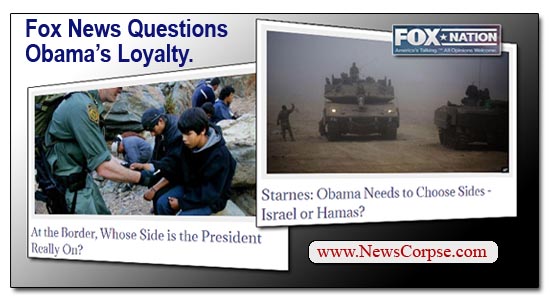 On their lie-riddled community website, Fox Nation, there are currently two articles that raise questions with regard to Obama’s patriotism. They overtly suggest that the President may be rooting for our enemies, including violent terrorists.

One article, with a headline that asserts that “Obama Needs to Choose Sides – Israel or Hamas,” blatantly accuses Obama of potentially being on the side of Hamas terrorists. It’s author, Todd Starnes of Fox News, responds to the FAA’s temporary ban on flights to Israel (which has already been lifted) by accusing Obama of implementing an economic boycott against Israel. Starnes says that “There have been no such flight bans over other war-torn nations. So why Israel?” However, in addition to defaming Obama, Starnes is demonstrating his ignorance of world affairs because there are other flight bans, including two hot spots in the news recently, Ukraine and Mali.

The second article’s headline asks “Whose Side is the President Really on?” Again, the Fox Nationalists are implying that Obama is not on the side of the nation he leads. This article concerns the immigration crisis on the southwestern border, and its right-wing author, Ed Rogers of the Washington Post, writes that “It is not hard to believe the president has a bias on the side of the foreigners.” Although it may not be hard for Rogers to believe it, he offers little of substance to support his theory. It appears to based solely on the administrations efforts to resolve the unfolding humanitarian crisis.

Ironically, it is over the immigration issue that the GOP Speaker of the House, John Boehner, has chosen to respond to a White House comment regarding the GOP impeachment fixation. Senior White House adviser Dan Pfeiffer is properly concerned that the extremists in the GOP are serious about trying to remove Obama from office. He told reporters that Republican talk of impeachment should not be summarily dismissed:

“I think a lot of people in this town laugh that off. I would not discount that possibility. I think that Speaker Boehner, by going down this path of this lawsuit, has opened the door to Republicans possibly considering impeachment at some point in the future.”

Boehner’s office responded in a painfully twisted manner that criticized Pfeiffer for reacting to the impeachment talk that Republicans began. Boehner’s spokesman lamented that the White House “is focused on political games, rather than helping these kids and securing the border.” That comment begs the question: Has Boehner lost touch with reality? It is the administration that is trying to resolve the border crisis but, as usual, Boehner’s comrades in Congress are refusing to cooperate on passing the necessary legislation.

What’s more, it is Boehner himself who is playing political games with his ludicrous lawsuit against the President. Remember, this is a lawsuit by a party with a long history of opposing frivolous lawsuits. They are also known for opposing regulations that burden small business. So, of course, they are now filing a frivolous suit against the President for easing regulations on small business. And then Boehner complains about political game-playing.

Pfeiffer, the White House adviser, is quite correct to worry about impeachment. The Republican Party is so thoroughly demented and/or corrupt that they may just be crazy enough to try it. For that reason, it is critical that Democrats wake up and make a commitment to vote in November. Democrats have been notoriously absent during midterm elections. But this time they must recognize that the President is on the ballot just as surely as he was in 2008 and 2012.

If anyone should be impeached it’s Fox News. They spend 24 hours a day, 7 days a week, disparaging America and its elected representatives. They tear the country down and call it weak and its people stupid. They practically invite enemies to attack us. What’s more disloyal than that? And if their disinformation helps Republicans seize control of the Senate it will empower the House GOP to draft Articles of Impeachment. And while they will still undoubtedly fail in the end, they will detour the nation from doing any of the important work that needs to be done to revive the nation’s economy, create jobs, and restore our reputation throughout the world.