There is a very good reason why Fox News viewers have been shown in numerous studies to be less informed than consumers of other media, or even those who consume no media at all. The reason is that Fox News deliberately misreports and distorts facts in order to advance their right-wing ideology. A perfect example of this was demonstrated in an article that Fox posted today on their community website, the lie-riddled Fox Nation. The article was titled “OBAMANOMICS IN ACTION: Typical US household Worth One-Third Less Than Under Bush.” 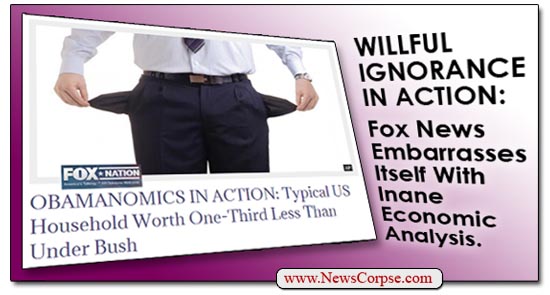 Want over 50 more examples of Fox embarrassing itself?
Get Fox Nation vs. Reality. Available now at Amazon.

The source for the highly inaccurate assertion in the headline was a study performed by the Russel Sage Foundation (RSF) and published by the Stanford Center on Poverty and Inequality: Wealth Levels, Wealth Inequality, and the Great Recession (pdf). The RSF describes itself as “the principal American foundation devoted exclusively to research in the social sciences.” The study itself is a well-researched and scholarly examination of the effects of the Great Recession on wealth inequality in the U.S. It took a fair degree of determination and willful ignorance for Fox to twist the report’s well-founded and non-partisan conclusions into a criticism of President Obama’s economic policies. And yet, Fox managed to do so, and they began by proving that they don’t know the difference between “median” households and “typical” households.

For the record, median, in this context, is referring to the dollar value of the subject’s net worth. It has nothing to do with the number of subjects in that value range. In fact, there are many more people on the lower end of the wealth spectrum than the upper end. Therefore, median does not translate to typical. As an example, if Bill Gates (net worth approx. $50 billion) were in a room with ten people whose net worth were $1 million each, the average net worth of the people in that room would be about $4.5 billion. Obviously, that is not the typical net worth of those people.

What the study shows is that wealth increased among the richest Americans throughout most of the Bush years, beginning with the GOP tax cut for the rich in 2001. That cut, along with two off-budget wars, also produced the massive deficits that sprung from the budget surplus Clinton left for Bush. During the same time period the rest of the country languished. Those in the 25th percentile actually began to decline in 2005, before the Great Recession hit. Following the Bush Debacle at the end of 2008 everyone lost money, but those at the bottom lost a far greater percentage of their net worth than those at the top.

Also, the characterization by Fox that things were so much better while Bush was president is based on measuring the difference from the beginning of the Bush term in 2001. But by using that as the starting point it diminishes his responsibility for the economic collapse over which he presided in 2008, and places more of the consequences of it on Obama. A more significant measure would start with the Great Recession in late 2008. From that point on there has been steady progress. The RSF report stated that…

“The housing, stock and job markets have all improved since 2009, but at very different rates. The stock market rebounded relatively quickly and returned to prerecession levels by the middle of 2013. The July 2013 unemployment rate of 7.4 percent was below the recession peak of 10.0 percent, but was still substantially higher than the 4.7 percent rate of mid-2007. However, the most important source of wealth for most Americans is their home, and by mid-2013 home prices were still 20 percent below their mid-2007 values.”

Indeed, it was home ownership that had the biggest impact on the wealth of the middle class because it is such a large portion of their net worth. For the wealthy their homes represent only a portion of their total worth, and it may not even be the largest portion. They may also have millions in investments, retirement funds, and other financial assets. And since the Great Recession resulted in millions of foreclosures on the middle and lower classes, many of which were unwarranted, or even fraudulent, those on the bottom of the scale were hurt the most. This had the effect of making an already historically prominent level of wealth inequality even worse. This was also noted in the conclusions of the RSF report:

Anyone giving this report a fair reading would come away with the impression that wealth inequality has risen to dangerous levels, and that much of the reason is the Bush recession. But the folks at the falsely named “fair and balanced” network brought their own biases to the table and delivered a preposterous mutation of the study’s findings. Their intention is clearly to deceive the public by persuading them of the fiction that Obama’s economic policies have failed, and that Bush’s were superior. However, you would have to be pretty stupid to buy that argument. Therefore, there are at least a couple of million Fox News viewers who will eat up with relish.

One thought on “Stupid On Purpose: Fox News Demonstrates Willful Ignorance Of Economics”