Tick Talk, Tick Talk…To all of the militant vegetarians out there – and we know that people who advocate against cruelty to animals are amongst the most brutal terrorists of our time – be aware that your cover has been compromised. The corpulent defender of ill health and Oxycontin abuse, Rush Limbaugh, has discovered your clandestine scheme to turn all of America into a model of rosy-cheeked physical fitness. ABORT, ABORT! 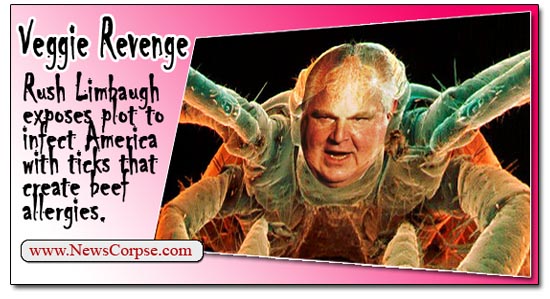 On his radio communique Friday, Limbaugh unveiled the dastardly plot contrived by the enemies of meat to turn all Americans into vegetarians via a unique form of bio-terrorism. I’ll let him tell it:

“Veggie Revenge. What is it? Well, in Texas, Texas, of all places, they have discovered a bug that can turn you into a vegetarian, or at least make you swear off of red meat. […] In some cases, eating a burger or a steak has landed people in the hospital with severe allergic reactions. The culprit is the Lone Star tick. […]

“[T]he radicals are gonna try to get hold of these ticks and mass produce them, mass grow ’em and spread ’em all over the country in order to get people to stop eating beef.”

That’s right. As we speak there are covert vegetarians clad in Che t-shirts herding genetically modified ticks on the Texas prairie into tiny tick corrals. They intend to release them on unsuspecting Americans across the country. They will probably target McDonalds and other fast food franchises as likely spots to infect innocent carnivorous diners. Limbaugh notes that he has “tried to call your attention to the militant vegetarians,” for some time. Let’s hope that it is not too late.

The vegetists are a wily bunch who seek to control every part of your life. They include First Lady Michele Obama, who has brazenly spoken out in favor of healthier diets for all Americans, especially children. That unscrupulous bitch. Although Limbaugh courageously calls out the nefarious veggies, he generously exempts the masses whom he regards as victims, saying that…

“[M]ost of ’em are dupes in the sense they don’t understand they’re part of a political agenda. […] If you’re a vegetarian and you don’t realize there’s a political agenda attached to what you’re doing, you’re being duped.”

So wake up you vege-dupes. Can’t you see that you’re being used by international Climate Change conspiracies to invoke a One-World government where everyone has good health, the air and water are clean and safe, and the planet can sustain life for the indefinite future? Is that the kind of nightmare existence you want for yourself and your children? It’s not as if the vegetists really care about anyone. According to Limbaugh it’s all political. He says that…

“The very idea that militant vegetarians demand everybody do what they do is all the proof you need that it’s political.”

Never mind that no one has ever heard a militant vegetarian making such demands. And it goes without saying that conservative extremists like Limbaugh would never demand that anyone behave in certain prescribed manners. Unless, that is, you want to purchase contraceptives, marry someone you love, wish somebody a happy “holiday,” or vote without having to show your government approved papers.

It’s a good thing we have Rush Limbaugh around to expose the nefarious plots being directed at an unwitting populace that would never know about these things were it not for his intrepid investigations and fearless devotion to us ignorant waifs in the hinterlands. So be grateful that there are such morally upstanding patriots like Rush to protect us all from our own stupidity. And, before you forget, strip and do a full body search to make sure you are free of militant vegetarian ticks.