The Fox News community website, Fox Nation, is a non-stop parade of deliberate misinformation, biased reporting, and promotion of notoriously disreputable purveyors of propaganda and conspiracy theories like Alex Jones and Breitbart News. [For more documented proof of Fox Nation’s lies, read Fox Nation vs. Reality] This morning that penchant for bullpucky was in full display with a trio of stories that perfectly illustrate the Fox Nation mission. 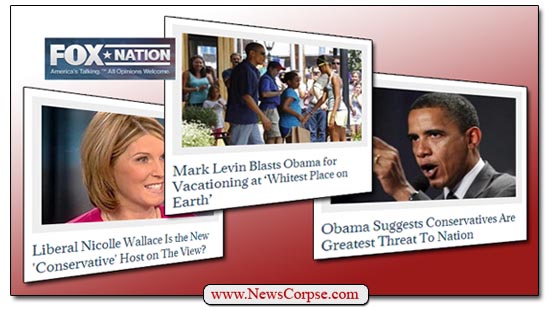 Let’s begin with a little item that alleges that “Obama Suggests Conservatives Are Greatest Threat To Nation.” This story was filched from the ultra-rightist Daily Caller (which is run by Fox News host Tucker Carlson) and referenced an interview of President Obama in the New York Times. Obama discussed gridlock in Washington and told the Times that “Our politics are dysfunctional.” That is an indisputable fact that is evidenced by this congress being the least productive in history. The article also said that…

“The president mused, the biggest threat to America — the only force that can really weaken us — is us.”

That’s quite a different statement than what was asserted in the headline. To be sure, it is Republicans that have boasted of their obstructionism. GOP House Speaker John Boehener even said that the congress under his “leadership” “should not be judged on how many new laws we create. We ought to be judged on how many laws we repeal.” By that measure they still suck because they have repealed precisely zero laws. But the point is made that they are proud of being an obstacle to progress. Nevertheless, Obama placed the blame more broadly on “us,” not conservatives as the liars at Fox Nation and the Daily Caller said.

Next up is an article that was picked up from right-wing media distorters, NewsBusters. They in turn were citing England’s version of the National Enquirer, the Daily Mail, who reported speculation that the former Director of Communications for George W. Bush, Nicolle Wallace, had been chosen to replace Jenny McCarthy on “The View.” Fox Nation turned that item into “Liberal Nicolle Wallace Is the New ‘Conservative’ Host on The View?”

“Liberal?” Wallace, as noted above, was a long-time political operative for the Bush regime. She was also a deputy campaign manager for his reelection in 2004, and headed up Sarah Palin’s communications staff for the McCain/Palin campaign in 2008. Wallace created a stir when she spoke candidly about Palin’s shortcomings after the election. But that doesn’t make her a liberal. It makes her intelligent and honest. On second thought, maybe it does make her a liberal, because those are qualities that liberals respect and conservatives disdain. However, for Fox Nation and NewsBusters to characterize Wallace as liberal after a career of conservative politicking is just plain delusional. Apparently the only replacement they would find suitable would be someone like Ann Coulter or Michele Bachmann.

Finally, the Fox Nationalists went to their resident screeching hyena, Mark Levin, for a taste of his undisguised racism. The headline on Fox Nation said “Mark Levin Blasts Obama for Vacationing at ‘Whitest Place on Earth’” Indeed, Levin seems to have found something objectionable about our African-American president and his family hobnobbing with his Caucasian superiors, rather than serving them drinks and cleaning their rooms as God intended. Levin continued saying to Obama that “We know how you hate whites,” and that Obama would be better off vacationing in the U.S. Virgin Islands. [Remember what happened to Glenn Beck when he said that Obama hates white people?]

But what makes this truly despicable is that Levin is not only racist, he is stupid – or is that redundant? As noted by Mediaite’s Matt Wilstein, Martha’s Vineyard has a richly diverse history:

“While Martha’s Vineyard is no doubt a ritzy island with more than its fair share of white people, Levin is clearly unaware of its rich history as a summer destination for wealthy black families. This is particularly true of Oak Bluffs, where African-American families began summering as early as the 1890s.”

Levin does make a valid point in one respect. Perhaps Obama should stay away from “the whitest place on Earth.” But it isn’t Martha’s Vineyard. It’s Fox News, where vile bigots roam free to disparage the nation, insult its citizens, and preach a brand of faith that exalts the wealthy, white, ruling class.

As usual, Fox News is rampant with racism, delusion, and bald-faced lies. The articles above are only a small sample of the repulsiveness that is published there every day. It’s astonishing that they get away with this and even attract devoted fans. Obviously, there is still a lot of work to be done in this country to stamp out bigotry and the ignorance from which it stems.

6 thoughts on “Fox Nation Outrage: Obama Vacations With White People – And Other Lies And Delusions”