News Corpse just wanted to make sure that everyone saw this hilarious segment of the Colbert Report that illustrates how obsessed Fox News is with fomenting fear among their trembling, dimwitted viewers. Of course, Colbert is a good friend of News Corpse as shown by this totally “real” photograph: 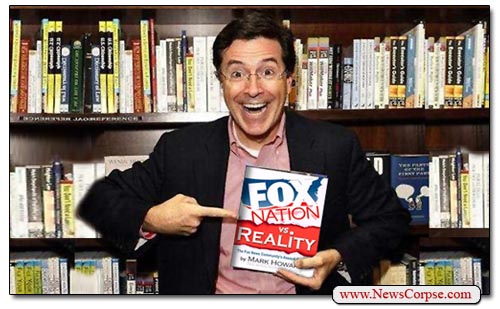 In the segment, Colbert skewers the tendency of Fox News to make a crisis out of everything and blame it on President Obama. But the best parts are aimed at the pitiful losers who are often featured on Fox making asses of themselves. For instance, Colbert brings up a favorite of the Fox & Friends Kiddie Krew with this introduction:

“Ebola is spread only through intimate contact with bodily secretions such as vomit, blood, or feces. Speaking of vomit, blood, and feces – Donald Trump…”

Colbert also singles out the neurosurgeon-turned-Teabagger, Ben Carson, by noting that when he was offering his insane speculation about bio-terrorism he was really “just yanking shit out of his ass. But remember, that’s another way Ebola is spread.”

The ridiculous hysteria that Fox is spreading about Ebola is way out of proportion to any actual threat. There have zero deaths due to Ebola in the Untied States. Contrast that with the 53,000 annual deaths from the flu. If you’re intent on worrying about exposure to a virus, you may want to reassess which one to irrationally fear. In fact, you are even more likely to die by your own hand (39,000 annual suicides) than to be killed by Ebola. So whatever you do, don’t get on any plane that you are on.