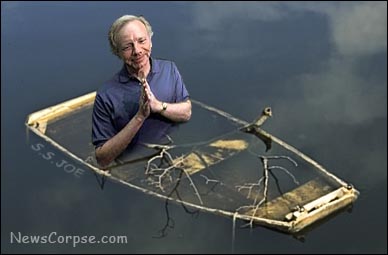 “Lieberman vows to stay in…”

That’s the headline on MSNBC. Not after last night’s Democratic senatorial primary in Connecticut where he lost to Ned Lamont, but on Jan 27, 2004, after his dismal showing in the Democratic presidential primary in New Hampshire.

“Thanks to the people of New Hampshire, we are in a three-way split decision for third place.”

Lieberman may be this year’s poster child for positive thinkers. The 18 year senate veteran lost to a political novice last night and his response is that:

“The old politics of polarization won. For the sake of our state, our country and my party, I will not let that result stand.”

Lieberman needs to clarify what he means by “old politics.” If a three term incumbent with a record of conservative capitulation (which he likes to call compromise), isn’t old, what, pray tell, is? And then he said:

“As I see it in this campaign, we just finished the first half and the Lamont team is ahead. But in the second half our team, Team Connecticut, is going to surge forward to victory in November.”

Contrast these comments with those he made to Chris Wallace of Fox News on November 14, 2004, following John Kerry’s loss:

Senator Kerry got a lot of votes, 56 million votes, more than any Democratic candidate for president in history, but there’s no prizes for second place in American politics.

The press has been dutifully repeating the shallowest analysis courtesy of the conventional wisdom crowd.

And it goes on. But the press can’t see past their obvious biases. The truth is…

There are pundits that are predicting a Lieberman victory in November based on their belief that a coalition of Republicans, Independents, and conservative Dems, will tilt the race his way. I don’t think it will be that simple.

First, Democrats are more likely to fall in line around their party’s candidate, especially with all of the party’s brass doing so. And Republicans in CT are almost as fed up with BushCo as Dems are. This morning’s news that Karl Rove sent Lieberman a message saying, “The boss wants to help. Whatever we can do, we will do,” is likely to do more harm than good.

Secondly, Lieberman is going to find it more difficult to raise money than he might think. Traditional Democratic donors are going to be thinking hard about backing an independent against the party’s standard bearer. The big donors need to be concerned about alienating the party’s leaders and committee members (and chairs?), and that will weigh on their funding choices.

In the end, I believe that money, not principle, will bring down Lieberman’s indie bid. But I’ve yet to see a single story in the media probing the state of Lieberman’s campaign financing. Just more of the same spin coming directly from Lieberman’s headquarters.