Fox News resident curmudgeon, Bill O’Reilly, has demonstrated his racial insensitivity too often to catalog here. Suffice to say that the man who was surprised that African-American patrons of a Harlem restaurant aren’t constantly screaming, “M-Fer, I want more iced tea,” is not the best example of racial tolerance.

So this week O’Reilly was promoting a segment on his program that would deal with the aftermath of the police shooting of an unarmed African-American. The promo asked a ludicrous question that sought to heap the responsibility of isolated crowd behavior unto the entire black population of America: “Will Black America Speak Out Against Looting?” 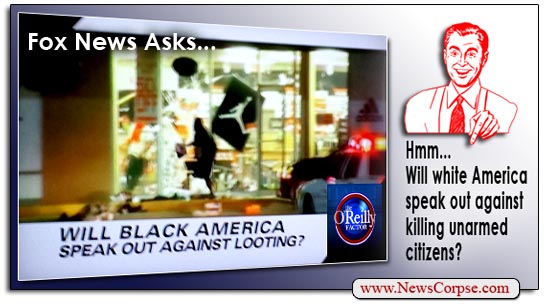 O’Reilly and his right-wing comrades are constantly lumping their ideological foes into categories where they have collective responsibility, but he absolves white people of having any part in the actions of their ethnic fellows. Muslims, for instance, are required to condemn the terrorists acts of Al Qaeda (which they have done), but whites are not asked to do the same when innocent Muslims are killed by drones.

For the benefit of O’Reilly and his racist cohorts, black Americans have been prominently speaking out against any law-breaking in response to the Brown killing. His parents have called for people to “come together and do this right, the right way. No violence.” Al Sharpton told a rally of supporters that “To become violent in Michael Brown’s name is to betray the gentle giant that he was.” President Obama released a statement saying…

“I know the events of the past few days have prompted strong passions, but as details unfold, I urge everyone in Ferguson, Missouri, and across the country, to remember this young man through reflection and understanding. We should comfort each other and talk with one another in a way that heals, not in a way that wounds. Along with our prayers, that’s what Michael and his family, and our broader American community, deserve.”

These comments expose O’Reilly for the ignorant and deliberately race-baiting provocateur that he is. Does every black person in America have to make a public statement before he will be satisfied? O’Reilly isn’t actually interested in people taking responsibility. He is only interested in laying blame and disparaging African-Americans as thugs or supportive of thuggery.

8 thoughts on “Bill O’Reilly Wants To Know: Will Black America Speak Out Against Looting?”