America’s foremost authority on quitting public service jobs, Sarah Palin, penned a new Fox News editorial to defend Rick Perry who was just indicted for abuse of power. Like every other Perry advocate, she misconstrues the facts with regard to the indictment. Perry is not being accused of issuing a veto. His alleged crime is abuse of power for attempting to coerce an elected officer to resign under threat of official retaliation.

The editorial is typical of Palin’s tunnel-blind perspective wherein every Republican charged with a crime is a victim of a partisan plot. In this case, she asserts Democrats are out to get Perry, despite the fact that the special prosecutor in charge of the case is a Republican who was appointed by a Republican judge.

Never one to be deterred by facts, Palin continues her rant by focusing on the Travis County District Attorney who Perry was trying to strong-arm out of her job. Rosemary Lehmberg was convicted of a DWI. She pleaded guilty, served her sentence, and pledged not to run for reelection. But Perry wasn’t satisfied and proceeded with his unlawful threat.

Palin isn’t satisfied either. She writes that “The appropriate and honorable thing for this powerful D.A. to do is resign.” Then she spends much of the rest of her opinion piece characterizing Lehmberg as a worthless drunk who has no business in public office. Of course, that’s a decision for the voters to make, not Palin and Perry. But if Palin insists that anyone who has ever been cited for driving under the influence be immediately sacked and run out of town, then I suppose we will shortly see her editorials calling for these Republican politicians to resign at once: 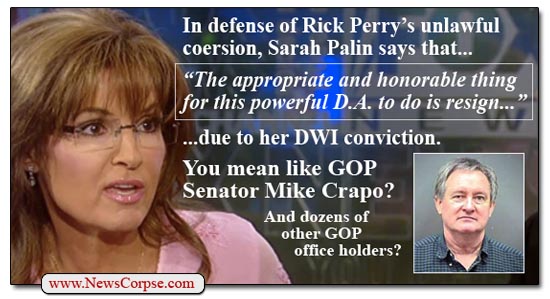 And if that weren’t bad enough, Palin’s husband Todd has his own drunk driving conviction on his permanent record. But don’t hold your breath waiting for Palin’s next wave of editorials. She has no intention of being consistent. Her only goal is to play defense for Perry and to demonize Democrats.

In that regard I have a little sympathy for her. After all, there are four GOP governors who have recently been subjects of speculation as possible candidates for the Republican nomination for president, who are under indictment or investigation: Perry, Chris Christy, Scott Walker, and Bob McDonnell. Certainly in Palin’s mind they are all innocent victims of liberal conspiracies. So she’s going to have a hell of a time writing editorials absolving all of them of any wrongdoing, and pinning the blame on Democrats.

11 thoughts on “Sarah Palin Thinks The Texas D.A. Should Resign Due To A DWI? How About These Folks Too?”