This weekend’s episode of MediaBuzz on Fox News featured a segment about the press coverage of the shooting death of Michael Brown, an unarmed teenager, by a Ferguson, MO police officer. Host Howard Kurtz booked Joe Concha, a conservative from Mediaite, and Keli Goff, a liberal from The Root, to debate the media’s performance during the aftermath of the shooting (video below). 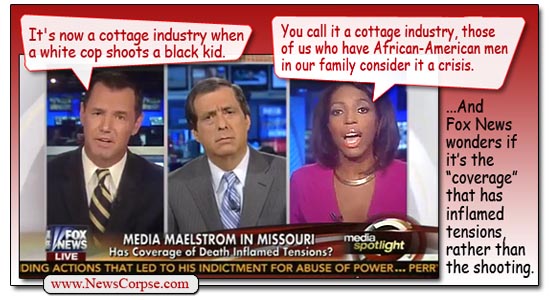 Concha immediately went into a defensive posture from the comfort of his TV studio. He took the side of law enforcement against the reporters who have been exposing the realities in the field, at great personal risk, where a militarized police department was harassing reporters and tormenting the residents they are sworn to serve.

Concha’s tirade began by condemning Wes Lowery, a Washington Post reporter who was arrested for doing his job. Concha accused Lowery of deliberately provoking the arrest and backed up his assertion by saying that Lowery’s media appearances afterward proved his self-interest.

Concha: “And here’s how you know that this was all about Wes Lowery expanding his television career. Right after he was released from custody, It was all about Tweeting out, calling Maddow Now (whatever that is), going on national television, went on CNN, MSNBC after that, Fox News as well. This was a media tour, Howie, that was only rivaled by Hillary Clinton’s. All in the effort to give Wes Lowery’s byline a microphone, a future career, and nothing more.”

Kurtz: Alright, I think that’s unfair. Wes Lowery is a good, solid reporter. He was deluged with requests to appear on TV, including from me. He only did a few of those. I don’t think this was as self-promotional as you do.”

When a reporter is arrested while covering a news story with national prominence, that is in itself newsworthy. It is not proper or ethical for the police to target journalists in an effort to prevent them from gathering and providing information about matters of public interest. Apparently Concha thinks otherwise. Keli Goff eloquently explained why it so important to have reporters on the scene covering everything that occurs, including police misconduct.

Goff: “With all due respect to Joe, I would hate to hear the kind of criticism he would have doled out about fifty or sixty years ago to the reporters who may have been a little slow to pack up their gear when they were covering another crisis, which was known as the civil rights movement.

Goff correctly pointed out that there were a lot of reporters who were assaulted during the civil rights movement and that they risked their lives due to their commitment to keep the people informed. She described Concha’s criticism of Lowery’s efforts to record the police officers as bizarre. And she went further to say that it would be irresponsible to NOT record such activity.

Next Kurtz raised the question of whether the volume of coverage was exacerbating the tensions in Ferguson. Concha quickly agreed that the television networks and the Internet were “fueling the flames” and then focused his criticism on MSNBC’s Al Sharpton, who went to Ferguson to beseech the protesters to remain peaceful. Then Concha began an exchange that reveals much about what is wrong with television news coverage.

Concha: “The bottom line is that it is now a cottage industry when a white cop shoots a black kid. Or, we saw it with Trayvon Marin last year, CNN, HLN quadrupled their ratings because of these sort of events. And ISIS and Gaza is happening somewhere overseas. This is domestic. A cheap and easy narrative. And that’s why we’ve seen the coverage go where it has.”

Goff: You call it a cottage industry, those of us who have African-American men in our family consider it a crisis, Joe. It must be nice to have an experience in this country where you can dismiss it as simply coverage.”

Concha: “You don’t get to do that to me, Keli. You’re calling me a racist on national television?”

Huh? When exactly did Goff call Concha a racist? It is telling that Concha perceived this imaginary insult and used it to flip the whole segment to one where Goff was doing something to him. After belittling the significance of the shooting of Mike Brown, Concha is now the making himself the victim. This is where Kurtz jumped in to tell Concha that Goff had not called him a racist. Concha later apologized for “overreacting” with regard to the charge of racism, but he never apologized for the underlying remarks dismissing the shooting, disparaging the reporters covering it, and referring to coverage as “cheap and easy.”

It’s a good thing that Goff was there to counter the insensitivity and aversion to ethical journalism as represented by Concha. And it’s a good reminder of why it’s necessary to not only have journalists in the field who are devoted to informing the public, but to have them in the studio as well to smackdown jerkwads like Concha.