The turmoil in Ferguson, MO continues as another night of confrontation between residents and police brings tear gas, arrests, and Fox News’ demeaning characterizations of aggrieved protesters. Not surprisingly, the disparaging tone is set by Bill O’Reilly who enjoys nothing more than lecturing African-Americans on the moral decline of their culture. O’Reilly, who is on vacation, called into his own show to tell guest host Eric Bolling that he questions the sincerity of the protesters. 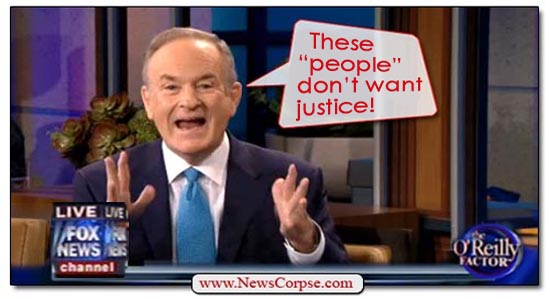 O’Reilly: “No justice, no peace? These people don’t want justice. What if the facts come out and say it was a justifiable shooting by the police officer? This guy was coming at them. What if they say that? You think these people are gonna accept that? They’re not gonna accept it.”

And there you have it. The definitive analysis by a recognized expert on the psychology of the angry black man. Clearly “those people” don’t want justice. And they won’t accept the results of a fair investigation because thugs like them are unable to employ reason and conduct themselves in a civilized fashion. And who would know better than O’Reilly who personally visited a restaurant in Harlem where he was surprised to learn that African-American patrons weren’t constantly screaming, “M-Fer, I want more iced tea.”

Elsewhere on Fox News, there was a story published on their website about the emergence of a video that Fox regarded as significant. Their headline said “YouTube Video Purportedly Captures Witness Backing Police Version In Ferguson Shooting.” Fox posted a link to the video along with a summary of the parts they considered important. 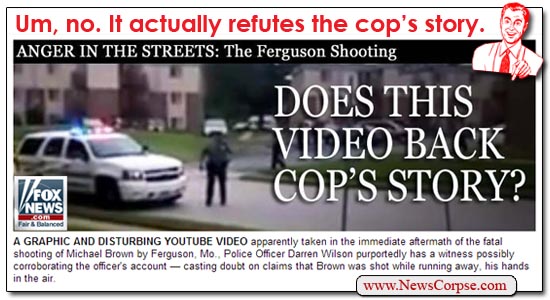 For instance, the article reports that the video shows “a possible witness saying [Michael Brown] the unarmed 18-year-old charged at the officer who fired the shots.” That’s a pretty damning allegation, except for the fact that it occurs nowhere in the video. In the actual part of the video (Warning: very graphic content) that they quoted a background voice is heard saying…

(about 6:45) “I mean, the police was in the truck [sic] and he was, like, over the truck,” the man says. “So then he ran, police got out and ran after him. The next thing I know, he comes back towards them. The police had his guns drawn on him.”

There is nothing in there about “charging” the police. That characterization was invented by Fox News. In fact, the video account is consistent with other witnesses who said that Brown ran at first, then stopped and turned toward the officer to surrender. Of course, that version wouldn’t align with Fox’s more theatrical rendition of a raging animal on the attack.

From the outset Fox News has sought to portray Brown as a dangerous, possibly drug-addled, criminal. Likewise, they have cast the protesters in the most negative light. In a remote segment from Ferguson, Fox News reporter Steve Harrigan was particularly insulting, which did not go over well with a bystander.

Harrigan: “This is right now a media event, pure and simple. This is people running towards tear gas, running away from it. The dignified protestors went home at dusk. This is just child’s play right now.”

Bystander: “Say that shit. I don’t give a damn you’re on TV, say that shit,” the unidentified man cursed at Harrigan. “We see this shit every day. This is just child’s play? Who is the child playing with toys? That’s them.”

One has to wonder how Harrigan distinguished the “dignified” protesters from the children. Perhaps he had Bill O’Reilly on his cell phone giving him advice as the night wore on. Because a common thread runs through all of Fox’s programming. Those people are immature, violent, and unreasonable. Just look at how upset they get just because another unarmed black kid was shot by a white police officer. What do they want, justice? Well, no, according to O’Reilly.

5 thoughts on “Bill O’Reilly: “These People Don’t Want Justice.” And Who Knows “Those People” Better Than O’Reilly?”