In troubled times, with Americans getting beheaded by terrorists, women being abused, teenage African-Americans being gunned down by police, working people struggling to lift themselves out of poverty, and all the while wealthy individuals and corporations assume ever more dominance of our social and political institutions, Fox News has managed to cast a spotlight on little-known but disturbing facet of life in these United States: 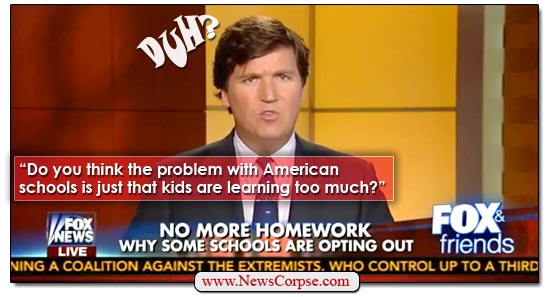 For more shameless stupidity from Fox News…
Get Fox Nation vs. Reality. Available now at Amazon.

That’s right, American children are suffering under the burden of becoming too smart. On Sunday’s episode of Fox & Friends, co-host Tucker Carlson presented a segment (video below) wherein he suggested that an alleged reduction in homework assignments was actually a well-coordinated conspiracy by teachers unions to achieve their long-held goal of reducing work for their lazy members. And everyone knows that teachers are among society’s most notorious slackers who yearn only for longer lunches and wasteful leisure. The industrious Carlson began his hyper-rant by saying that…

“A growing number of schools are opting out of giving kids homework. They say that students should use the time to be with family and friends. But is this really about the kids, or could it be a move by teachers unions to get teachers to do less work for, of course, the same pay?”

This is a remarkable turnaround for the Fox set who ordinarily praise initiatives that bring families closer together. It is such an obsession with them that they fiercely advocate homeschooling which, of course, means nothing but homework for the kids, and much less work for teachers. And pay no attention to the fact that Carlson offers no shred of evidence that unions played any role in this alleged trend.

Carlson interviewed Whitney Neal of the Bill of Rights Institute, which was founded by Charles Koch. Undisclosed by Fox News is that Whitney Neal is also the Director of Grassroots at FreedomWorks, another Koch brothers operation. The Kochs are heavily invested in twisting the nation’s academic institutions to conform to their personal, political, social, and business interests. Neal agreed with Carlson’s unsupported insinuations, but went further to say that she believes the whole thing is “more of a ploy to keep parents out of the classroom […] because if kids aren’t bringing home homework, the parents don’t know what’s going on.”

So by providing kids with more time to be with their parents, teachers are somehow inhibiting the interaction between kids and parents. How insidious. What’s more, Neal believes that homework is the only way that parents can have any idea of what is going on with their children in school. They certainly couldn’t go to the school, or ask the kids, or the teachers, or the administrators, or otherwise involve themselves in their child’s education. Neal’s argument is that kids should be getting more homework, not for the benefit of the student, but so that parents can see what kind of homework they get.

If you think that was stupid, just wait until you hear Carlson’s next question:

Well, it is if you’re Fox News. The last thing they need right now is an educated populace. That would decimate their viewer demographic (if you know a Fox News viewer, please tell them what “decimate” means). Not to mention how it would shrink the ranks of the Tea Party and the Republican establishment that feeds off of its innate ignorance.

For the record, teachers are among the hardest working, least appreciated professionals in the country. They are often belittled as nothing more than babysitters and criticized for having a truncated work schedule. See this lovely infographic for the truth. And watch this video from Fox & Friends to observe some real failures in the education system who nevertheless achieved success in television punditry (for which there are no academic requirements and requires no certification).