At a time when the United States is struggling to be competitive in international markets, our education system is rapidly falling behind. Out of 34 countries, the U.S. ranked 14th in reading, 17th in science and 25th in math. The Republican Party is doing everything it can to glorify the worst of American Except-tionalism: the right-wing notion that America’s success is absolute except for high standards of living; except for access to health care; except for tax equality; except for a clean environment; except for fair elections; and, of course, except for education. 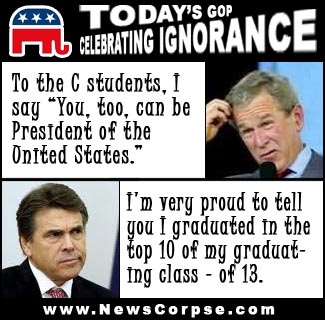 The Republican Party seems to revel in its own idiocy, They are proud of it, and they say so. Currently leading in the race for the GOP nomination for president is Rick Perry. This is a man who received C’s in U.S. History, yet lectures on the meaning of the Constitution.; he received D’s in the Principles of Economics, yet presents himself as an expert on fiscal policy; he failed Organic Chemistry, yet wants to be taken seriously when denouncing evolution and Climate Change. And this isn’t some fringe candidate – this is their front-runner.

Somehow, a frighteningly high number of citizens are persuaded by the inane arguments set forth by Republicans on critical matters like Social Security and Climate Science. That is likely a result of the very same policies that Republicans advocate. They abhor education. They want to eliminate the Education Department. They disparage prestigious learning institutions as elitist. They boast of their own ordinariness and shortcomings. And this example is then set for their constituents to follow. Ignorance then becomes the predictable consequence.

That is precisely what the GOP intends. It is far easier for them to manipulate an uneducated, uninformed electorate. And it is advances their goals to provide benefits to the wealthy and to corporations at the expense of the folks they are deceiving. All of this makes it evermore imperative that we persist in getting out truthful information in as broad a manner as possible.

It’s a tough assignment because it will always be easier to make people stupid than it is to help them become fully informed. The right is now whining that President Obama has declared a “class war.” The truth is that there has been a class war raging in this country for decades, and the rich are winning. The gap between the rich and the poor is wider now than at any time since the Great Depression. None other than billionaire Warren Buffet made this same argument. It’s time for the lower and middle classes to fight back. It’s time to restore some fairness in the economy. And it’s time for the wealthy to share some of the sacrifice necessary to heal the nation.

In order to do this we need to expose the robber barons who want to keep the people down and dumb. Thankfully, we have on our side the propensity for Republicans like Sarah Palin, Michele Bachmann, and Rick Perry to demonstrate their witlessness with unambiguous relish. They just can’t help it. Sooner or later (hopefully sooner) the people will see through their charade.