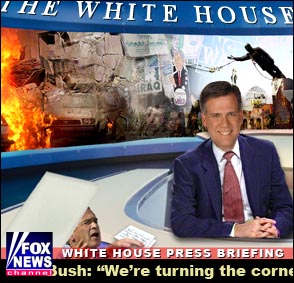 The “war president” reveals his cowardly side by taking extraordinary steps to protect himself from the scary reporters. The Washington Post reports that Bush has taken to traveling without the customary press plane in tow. This is unprecedented in presidential media coverage and especially troublesome during a time when the US is at war, as are nations critical to US national security. The Post says:

“In the four decades since the assassination of John F. Kennedy, presidents traditionally have taken journalists with them wherever they traveled on the theory that when it comes to the most powerful leader on the planet, anything can happen at any time […] But increasingly in recent months, Bush has left town without a chartered press plane, often to receptions where he talks to donors chipping in hundreds of thousands of dollars with no cameras or tapes to record his words for the public. Barred from such events, most news organizations will not pay to travel with him. And so a White House policy inclined to secrecy has combined with escalating costs for the strapped news media to let Bush fly under the radar in a way his predecessors could not.”

On the day the British government announced that it had arrested a couple of dozen terrorists, Bush was traveling to a fundraiser where the only available press was a few pool reporters and the local media. The absence of a diverse correspondents corps produces news that is hollow and narrowly focused by the limited viewpoints of the few that attend. This absence also plays into the hands of an administration that has elevated secrecy to an art form.

Tony Snow, the Fox-sponsored White House press secretary, says that it’s just a question of money. The news organizations are too cheap to pay for the trips. But the Post’s report claims that it costs between three and four thousand dollars for typical day trips. That’s petty cash for most national media firms. I suspect the real reason is not that it’s too expensive, but that it’s not worth the expense. When traveling with this president, the likelihood that there will be newsworthy interaction is negligible. That may be why the Boston Globe no longer has a White House correspondent. There’s just no return on the investment.

Snow also said that, “If there is big news, we make sure the president’s available.”

That’s right, available to Brit Hume or other Fox anchors. At least Nero was able to kick out some jams while the world crumbled around him. Our emperor cowers behind the skirts of Fox News praying for the Rapture. And what do they consider “big news?” The arrest of 24 British terrorists? A UN cease-fire agreement in Lebanon? A million dollar pork-fest for an endangered Wisconsin congressional candidate?

Last month the White House shut down its press briefing room for the next nine months – straight through the fall elections and all of the news of today’s tumultuous world. The fear is palpable as the president is shielded from the light because his handlers know that it would reveal a trembling wretch with no solutions for the shambles for which he is mostly responsible. And as fleetly as he flees the press, his allies flee from him for they too have fear – fear of being tainted with his stench.

So he dodges and weaves and ditches the press, who don’t really care that they have been left behind. No one will even be there to record this retreat because the campaign to eliminate access to this president is proceeding so efficiently, that by Christmas no one will remember who the president is. I suppose that’s the good news.